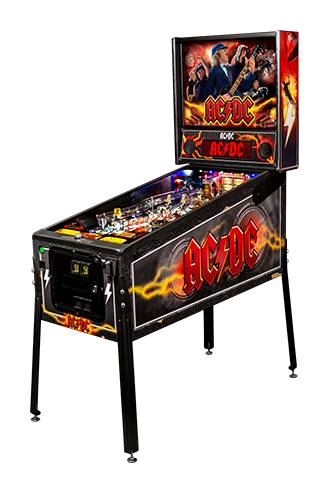 AC/DC is a high voltage pinball experience brought to you by the wizards at Stern Pinball and pinball designing legend Steve Ritchie. Since its release in 2012, the game has won over fans all over the world and as of MAy 2017, demand has been so high that Stern has fired up the manufacturing lines for the game once again!

The game itself takes you on a journey through twelve of AC/DC’s most iconic songs including Back In Black, Highway To Hell, You Shook Me All Night Long, For Those About To Rock (We Salute You) and more. This music is pumped through an enhanced sound system which includes a 12″ subwoofer.

The playfield then features an art package based on concepts from the songs as well as a 3D molded “Hell’s Bell” toy and a TNT Detonator. With a rich rule set, various targets to shoot for, LED lighting and more, this is considered by many players to be one of the best designed tabled that the company has released in recent years.

The game was also produced in Premium, Limited Edition and LUCI models.

– Ships with a standard US coin door

– Also available in a Premium model

NOTE: Aftermarket solutions such as ColorDMD monitors are not covered under Stern’s warranty