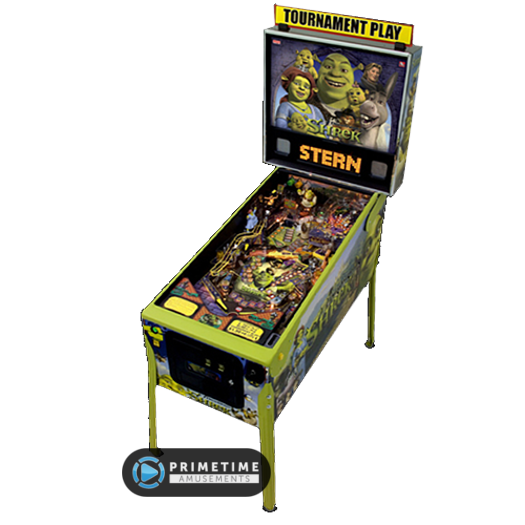 Journey to the whimsical kingdom of Far Far Away in SHREK by Stern Pinball. This game features elements and lines from the first three Shrek films.

Based upon the same playfield layout as Stern’s Family Guy, Shrek re-skinned everything while sporting completely new software. Custom speech was also created for the game that sounds exactly like the original voice actors!

One of the main features of the playfield is Donkey’s mini-playfield. This is a small pinball playfield that sits in the upper right hand corner. It has mini-flippers that the player controls with the regular flipper buttons when the game is in ‘Donkey mini-playfield’ mode. The mini-playfield has ramps and targets to shoot at while an actual Donkey figurine spins in front of the mini-playfield.

The rest of the game is a fast-paced affair with the pinball launching out onto the playfield into the middle instead of around the back. There are three flippers and plenty of game modes to explore that will have to in knots of laughter!

– 3D molded toys of Shrek, Fiona, Puss In Boots, Gingy and Donkey (w/ motor to move him around)

– Features five primary game scenarios based on events from the movies

– Stern’s Shrek Pinball is no longer in production, having been released in 2007. Please call us about availability. All used models pass through PrimeTime Amusement’s “Certified Pre-Owned” program, which guarantees that the game will be completely refurbished and ready to operate upon arrival.

Dost thou have additional questions or art thou ready to buy?