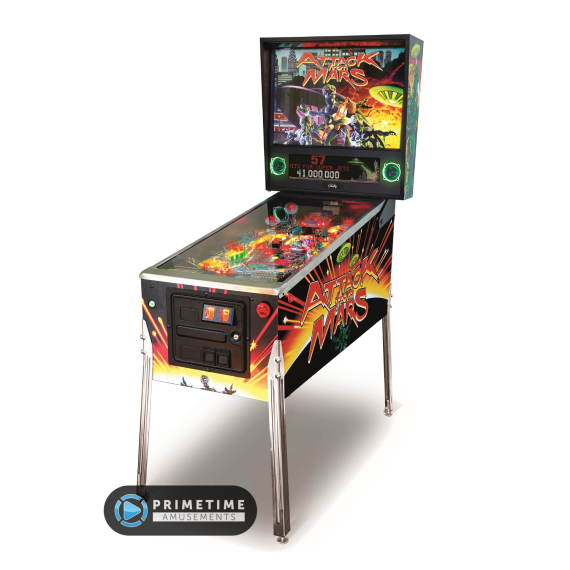 CLICK HERE TO DOWNLOAD/VIEW THE ATTACK FROM MARS FLYER (PDF)

The Martians are back in a remake of one of the most enjoyed pinball machines ever released – Attack From Mars.

Developed by Planetary Pinball and Chicago Gaming, this new remake has been designed to surpass the original in quality in every way. The playfield layout and artwork are just like you remember them, featuring that 50s alien invasion movie style that fans love. What has changed is that the game now operates using modern technology. The circuitry and game hardware has been engineered to improve reliability, simplify serviceability, reduce energy consumption and provide game owners with the ability to customize their own game. The game uses LED lighting but you wouldn’t know it at first glance as the creators have taken pains to recreate the soft, warm glow of incadescent bulbs. Even the cabinet has been upgraded – Both the cabinet and backbox are manufactured with melamine clad plywood. Melamine is 10 times more scratch resistant than traditional lacquer finishes. The original fiberboard cabinet bottom has been replaced with a ½” plywood bottom for greater strength of the cabinet and added protection for the cashbox.

Finally, the display uses a modern LCD. On both the Special and Limited editions of the game, this display is large (19″ across) and in color, sporting HD graphics that beautifully represent the hand-drawn pixel artwork. The Special edition also includes an enhanced sound system, metalized saucers with tri-color LEDs, a shaker motor and a 12 month factory electronics warranty.

– All electronics have been redesigned with modern reliability in mind

– Large 19.25″ wide HD LCD display with full color graphics; all of the hilarious scenes are intact and better than ever