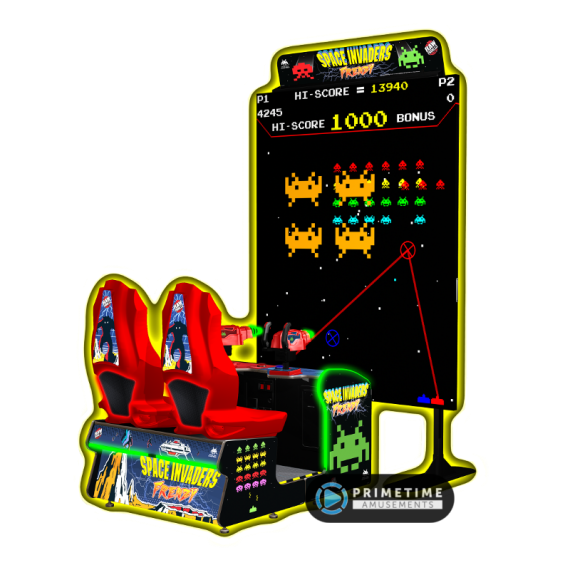 In 1978, a video game came along from Japan that changed the entertainment business forever. That game was Space Invaders by Taito. Soon afterwards, arcades around the world found themselves packed with players chomping at the bit to get into the invader blasting action. The country of Japan suffered from a coin shortage which was directly attributed to the game. The world had a fever and it could only be cured with more Space Invaders.

Fast forward to today and video games are ubiquitous with daily entertainment options. For Space Invaders to return, they would have to make a big impact. With the new Space Invaders Frenzy by Raw Thrills, “big” and “impact” certainly come to mind when you first see the game!

Space Invaders Frenzy combines several technologies into one game for a unique arcade experience. The giant screen is the same LED billboard technology that was used with World’s Largest Pac-Man. This provides for high contrast gaming that is also cannot be precisely replicated on a home TV or mobile device. Operators can also upload their own video ads to display during the game’s attract mode, allowing you to market your venue, your sponsors or upcoming events!

The game also reuses the gun technology and Thrill-D sound system from the popular Jurassic Park Arcade.  This means easy-to-use controls that players of all ages will be able to get the hang of instantly. They did spruce the guns up slightly however – the tips now have a green LED mechanism to give them the feel of ‘ray guns’!

Check out this game in action from IAAPA 2016!

In Ticket Mode, players try and survive as long as they can against ever aggressive hordes of invaders that will march towards the bottom of the screen. Large invaders will break up into smaller ones, which move faster as the players progress. Shoot the elusive bombs to help clear the screen and win tickets! Survive the longest for the biggest points and win that Hi-Score Ticket Jackpot!

In Non-Ticket Mode, the game takes on a more classic feel as players must survive 50 waves of enemies in their quest for the Top Score. This makes it an amusement arcade game instead of a redemption game. UFO Waves happen every 5 rounds.This mode incentivizes head-to-head competition and also features unique voice overs.

– Video billboard feature: Run your own video ads during the attract mode on the high-bright LED screen

– Set it to Ticket mode (default) or Non-Ticket (amusement) mode

– Comes with a pair of coin slots and 25¢ coin mechs; compatible with DBA and card swipe systems

Want to see Space Invaders Frenzy in person? You can find it at the PrimeTime Arcade inside the X-Treme Action Park in Ft. Lauderdale, FL!