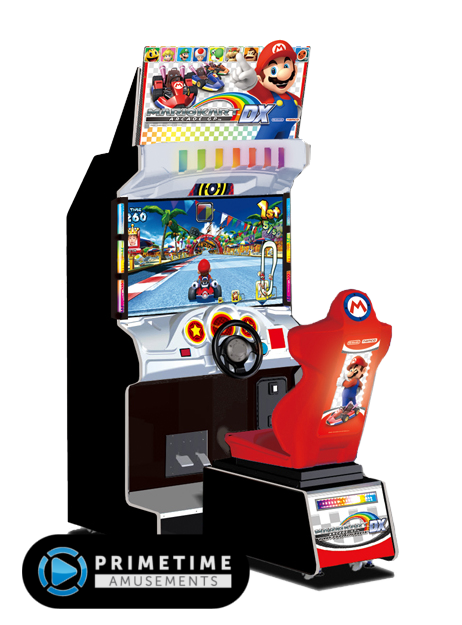 The third time is a bigger charm and such is the case with Nintendo and Bandai Namco’s Mario Kart Arcade GP DX. This version of the incredibly popular racing franchise comes with new race courses, new game modes, new karts, new features and a multi-colored LED lighted cabinet that sports a 42″ HD Monitor. The game still maintains some of the aspects that make this fork of the Mario Kart series unique, including a huge number of items (over 150). Race not just as Mario but also Pac-Man on exclusive courses not found on any home version of Mario Kart!

Namco has also reused their popular NAM-CAM feature that has been found in many other titles. NAM-CAM lets players make a Mario Kart themed avatar by placing a character overlay onto your face!

With the “Final” Update, the game has 2 game modes to chose from: Grand Prix or Versus. Link up to four units for a fantastic kart battle royale!

NOTE: As of December 21st 2016, all Mario Kart Arcade GP DX units received their “Final” online update. This update added new tracks & items but also DEACTIVATED the online functionality. This means that the online connection and fee for the game is no longer required. Please visit Arcadeheroes.com for more details on this update.

– Exclusive to arcades, just like the two previous Mario Kart Arcade entries were

– Play as some of the biggest names in video gaming including Mario, Luigi, Bowser, and Pac-Man

– Familiar, intuitive gameplay that is easy for anyone to enjoy

– Huge number of items are given to players

– Link up to four units for multiplayer fun and bigger earnings