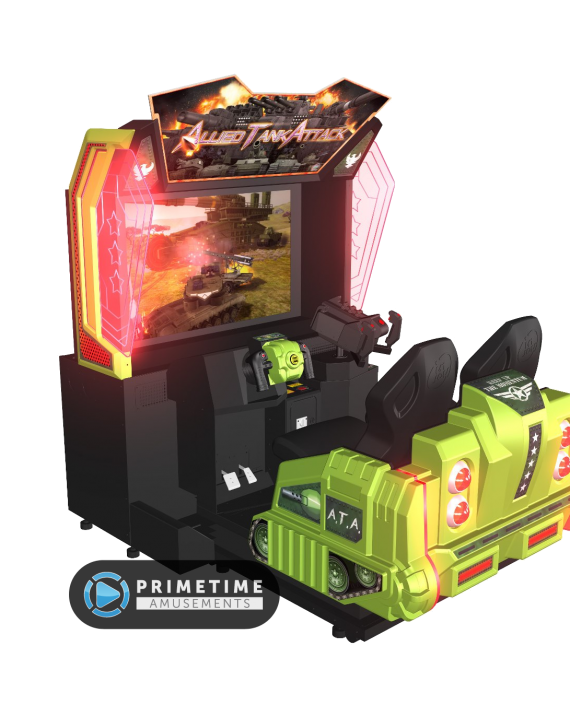 Take the fight to the Axis Forces and save the world from the “Phantom Armor” in this unique, alternate World War II video game by InJoy Motion and Barron Games.

Allied Tank Attack offers three games in one thanks to the presence of three game modes: “Story Mode”, “Battle Mode” and “Survival Mode”. These modes operate as follows:

At the beginning of each Mode, players get to design their own tank. Select from six base tanks and ten different turret configurations including the standard cannon, missile rack, sniper cannon, flame thrower and more. Control the action using a force feedback steering yoke controller (allows for up/down aiming as well as steering) and a forward/reverse pedal system.

The main thing to stand out with this game is the use of InJoy’s unique “AIR” motion system. Instead of using expensive electromechanical arms to give the seat 3-axis motion, this uses more reliable and less expensive air bladders. This revolution in motion gaming means more up-time and higher earnings without driving up the cost.

The Deluxe model features a 55″ monitor and a unique control setup – here, one player is the driver  (with control over the main cannon) while the right seat has their own mounted force feedback light-gun which is used to operate a turret. This innovative design is unlike anything else in the arcade and you can link multiple units for stronger earnings!

– Exclusive to arcades! Not available on any home console or mobile device

– Deluxe model features a Yoke controller for the driver side; mounted force feedback light-gun on the passenger side

– Deep gameplay with three modes providing something for everyone

– Twin seat configuration can link up to four ATA cabinets for multiplayer war! With Deluxe models, that means 8 player mayhem!

– Also available in a single-seater cabinet!