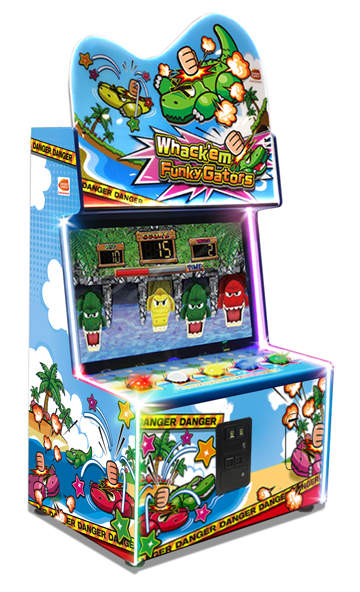 You might remember Namco’s classic “hammer” style redemption game, Wacky Gators. It was a great twist on the hammer/whack’em concept but it was prone to technical issues.

Enter in a video remake of the same concept, now entitled Whack’Em Funky Gators! It’s the same kind of game but translated into video redemption. The cartoon-style gators will pop out of their coves on the screen and the player must hit the button where they are at to “whack’em”. Hits = points while misses are tracked separately. Win the biggest number of tickets by being both fast and accurate.

In a twist, this uses the benefits of video to sometimes challenge the player with bigger alligators that require more hits to bash!

In this instance, the only component taking a beating are the large backlit arcade buttons. Since they use tried-and-true technology, they tend to last longer and when they do fail, replacements won’t set you back that much either!

-The classic mechanical redemption game returns as a video title for the same fun, but less maintenance!

-Easy to learn, fun to play for all ages – it’s like Whack-A-Mole with alligators!