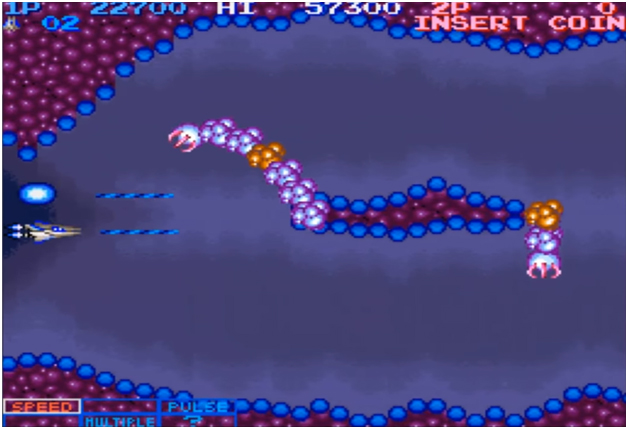 Back in the early ‘80s, a little over a decade after the space race had subsided in the wake of the moon landings, space-themed video games were all the rage in entertainment media. This included gaming on arcades, home consoles, and PCs. So many games from this era put the player behind the controls of a space vessel, from titles like Asteroids, Gravitar, and Space Invaders, to scrolling “shmups” like Life Force, Gradius, or R-Type. In most of those instances, you played the role of an intrepid starfighter pilot, facing down hordes upon hordes of angry aliens.

Salamander is—you guessed it—another space shoot ‘em up game. It is the Japanese version of the very popular American title Life Force, which was released to arcades first, but made popular through the port on the Nintendo Entertainment System. Released in 1986 as a spinoff title to Gradius, Salamander showed much promise as it streamlined the power-up system and set the stage for players to focus more on the game itself, rather than struggling with the mechanics. Furthermore, like its predecessors, Salamander features both vertical and horizontal scrolling stages, something that would become a staple in future Gradius games.

The story of the game is very interesting—at least, as far a space shooter stories go. In this case, you take control of an ace pilot aboard the Vic Viper to stop the evil Zelos from destroying the planet. The objective of the game is to enter the massive beast using the Viper’s cutting-edge technology and destroy it from the inside out. Curiously enough, while the games are basically the same in terms of stages and mechanics, the story in the American version (Life Force) consists of entering the human body and destroying pathogens like viruses or microbes to remove diseases. Regardless, the concept is the same: enter body, kill aliens, go home. And really, that’s context enough for us to enjoy the game.

In this guide, we’re going to give you a few tips to improve your Salamander game, starting off with the basics. 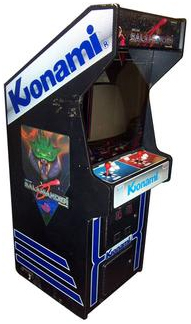 In terms of controls, Salamander is very simple and straightforward: you use the joystick to move around, and the “fire” button to shoot projectiles straight ahead. Your projectile type will vary according to your current power-ups and will go from a stream of bullets to several different types of lasers. There is also a missile button that is used to fire several missiles to either side of the ship, though you need to pick up the missile power-up for this option to become available. If you’re playing Salamander, it means you’re playing the Japanese version of the game. In this version, you can also use the power-up button to activate whichever item is currently highlighted in the power-up pane.

At the beginning of each round, your ship will appear with the lowest speed and the weakest weapons. However, as you progress through the game and defeat enemies, they will sometimes leave behind power-ups that you can pick up to slowly increase your capabilities.

There are many types of power-ups in this game. However, in the Japanese game, you could access the different types of power-ups by picking up power capsules, and then pressing the “power-up” button when the appropriate item was highlighted. For each capsule that you pick up, the selection in the power-up pane would shift one space to the right. In this sense, in order to activate the desired power-up, you need to pick up enough capsules to shift the selection onto the desired power-up and then press the button to activate the buff.

The power-ups you can unlock in Salamander include the following:

In the Japanese game, just like in the American version, you can pick up several power-ups in the pre-stage phase. A good setup for most stages consists of speed-up, one multiple, the laser, and the missile power-ups. You’ll need to pick up a total of 12 power capsules to activate all of them, though.

Most stages in Salamander are divided into several phases. Although most of the gameplay will be held in the stage itself, there are two other phases in which you will face different challenges.

Most important of all, however, is the pre-stage phase in which you will run into several formations of enemies that fly at you in a straight line. They make for very easy targets and drop many power capsules that you can use to increase your offensive capabilities and prepare for the upcoming stage. At the post-stage phase, after braving the challenges that the level throws at you, you’ll need to fight a boss enemy to proceed onto the next stage. The boss takes much more damage than standard enemies to kill, and have their own unique repertoire of attacks.

For now, you have the knowledge necessary to dive into the game and try your hand at defeating Zelos’ forces. Stay tuned for part two of this guide where we will go into detail on how to beat each stage and boss.