It’s that time of the month again where we sit down and discuss strategy about how to win big at our favorite arcade games. This time, we’ll be talking about a timeless classic by Taito; released in 1978 in Japan and distributed in the US by Midway Games, Space Invaders is one of the first arcade games in the Shoot ‘em Up genre, and one of the most important titles in arcade history.

The gameplay, as you very well may know, consists of shooting down wave after wave of alien invaders with a mobile turret cannon situated at the bottom of the screen in order to score as much points as possible. The game derived inspiration from famous staples in the game and movie industries, such as Breakout, War of the Worlds, and Star Wars.

The game is by no means complex by today’s standards, but it was one of the precursors of modern shoot ‘em ups which helped to expand the industry back when it was just a novelty pastime. Space Invaders was so popular from as early as its launch date, that it was directly responsible for a brief shortage of ¥100 coins which were used in the arcades throughout the country. As of 2007, Taito had made around $500 million in utilities, thanks to Space Invaders.

As we mentioned just now, the objective of the game was to survive the longest while scoring the most amount of points in a single run, as was common in arcade games of the time. In this article, we aim to go over a few stratagems you can use to maximize you chances of survival, while getting a high score that would put to shame even the most hardened Space Invaders veteran in your local arcade.

Want to get good? Then read on!

Before we run, we always need to learn how to walk, and Space Invaders is no different. Before we get good, we need to know the basics.

Every screen consists of a fixed number of space invaders which come in 3 types. These invaders move in wave formation from left to right and each time they touch a side, they descend one row. If the invaders reach the bottom row, the game is over, regardless of how many lives the player has left. A screen of invaders is worth a total of 990 points, a score which can be increased by shooting and destroying the mystery spaceship which frequently appears on top of the screen, moving quickly.

Now, the aliens will constantly shoot missiles at the player’s turret as they move, each of which does a different amount of damage depending on the type of missile. While the player only needs 1 missile to lose a life, the different types of enemy munition will damage the player’s protective bunkers in differing amounts. Furthermore, it’s possible to block the enemy’s missiles with your own well-placed shot, though their shots will frequently survive your own and keep hurdling towards you, especially if they’re the stronger version of enemy fire: the wiggly-line missile.

In order to win at the game, there’s a degree of practice involved to get familiarized with the game’s “heartbeat rhythm”. Since there is no time limit, the player simply needs to get accustomed with the enemy’s movements and make every shot count. A good way to artificially extend each round’s duration is to start by destroying the invader’s outer columns, so that it’ll take longer for them to reach the sides of the screen and descend a row. This strategy is valid for every single screen, and will become an important strategy you’ll need to adopt in order to survive from level 4, all the way to level 10.

A few things you’ll need to consider before setting off to beat the high score is that you only have 1 shot on screen at a time. This means that in order to shoot again, you’ll need to wait till your shot either collides with an enemy unit or reaches the top of the screen. Precision is key when playing Space Invaders; it won’t do to just fire wildly at enemies, given that missed shots lead to more downtime on your turret.

One more important tip is related to the proper usage of the bunkers. These safe havens can take a bit of fire before getting destroyed, however, be mindful of the strong missiles, as they can blast through the bunker and hit your turret. A good way to use the bunkers is that, when they are damaged in the center, you can shoot a hole through the middle which you may fire from, giving you a vantage point where you can damage the enemy, while staying safe yourself.

Those are the basics you’ll need to master in order to get good at Space Invaders. With these tips you will most likely be able to get to level 10 and beyond, and set your own high score in the local arcade. However, those that are seeking to maximize their potential should also heed the following tips:

Getting the Max Score From Mystery Spaceships

The bonus points you receive from shooting down a mystery ship is not random. On the contrary, the points you receive are proportional to the amount of shots you’ve fired in the current round. If you shoot the ship with your 23rd shot, you will receive the whole 300 bonus points from the mystery ship. If you have already fired more than 23 shots, however, the score is reduced. Nevertheless, there is a way to receive max score after the firing more than 22 shots, and it depends on you accurately keeping count of how many lasers you’ve fired, so far. The mystery ship yields 300 points for shooting it with the 23rd laser, and on every 15th laser after that. If you miss the bonus ship on your 23rd shot, then you’ll need to count 14 more shots and hit it with the next.

By keeping track of how many shots you’ve fired, you can effectively maximize your score.

The mystery ship moves fast and sits all the way behind a wall of invaders. Hitting it can be really challenging, especially if there are lots of invaders left. However, a reliable way to destroy the mystery spaceship is by using the game’s UI as a point of reference:

With this in mind, you will almost always destroy the elusive mystery ship and nab those sweet, sweet points for yourself. 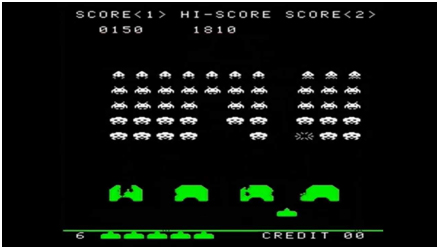 There are, of course, tons of strategies on the internet about how to maximize your potential in Space Invaders, but with these tips and a sizeable amount of practice, you will be able to get all the way to level 10 and beyond. Keep in mind that the game resets after level 10 and the cycle starts over in level 11, so if you make it to this stage and get familiar with the game’s rhythm, it becomes a battle of attrition in which the only thing stopping you from getting a good score is if you lose focus and mess up. If this happens, however, don’t sweat it and keep trying!

Space Invaders, like most games, is all about practice.

Here at PrimeTime Amusements, we’re always working to provide the very best arcade game sales and rental solutions. If you want to place a specific order, or inquire about our wide variety of machines, feel free to call us at 1.800.550.0090, or drop by at 5300 Powerline Rd, Suite 210, Ft. Lauderdale, Florida, 33309.

Tekken - Taking the Iron Fist to the Arcades