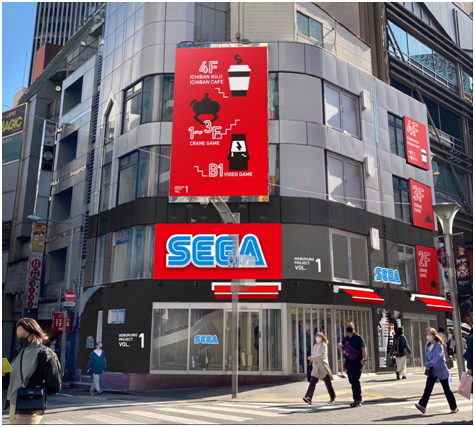 There have been a fair bit of bad news coming from the Japanese arcade industry as of late, what with the closing of two iconic Sega arcades in Akihabara, starting with the renowned SEGA Arcade in late August last year, followed by the Ikebukuro GiGo in mid-September this year. Luckily, the news hasn’t been all bad, considering that, while iconic businesses close, fresh new faces also pop up and try to fill the gaps, such as the officially licensed arcade bar that opened its doors in Tokyo in October last year. And fortunately, we’re bringing another bit of good news today as Sega has officially revealed a brand new arcade business opening in Ikebukuro, right across the street from the old GiGo that closed just a short time ago, in fact!

This new development comes from the team at Genda Entertainment, which is the company that Sega sold off a majority of their business to last year. The team announced that the new location would be opening this very October 22nd, and should already be ready for action by the time you’re reading this article. In fact, the announcement tweet went live just a scant 10 hours ago as of writing this piece.

As far as games go, the building will have four stories, three of which will be dedicated to crane games, which seem to be a significant focus of the team, and which will offer limited-edition prizes to the lucky few who manage to snag a piece or two. The top floor, on the other hand, will be dedicated to a café and a place where people can sit, relax, and unwind. And if you’re a fan of arcade games, then you’ll have the basement completely dedicated to video titles, although one 1 single game is found there – Bandai Namco’s extremely popular Mobile Suit Gundam Extreme Vs. Boost 2.

Those of you who are arcade game enthusiasts might be a bit disappointed to see such a strong focus on crane games this time around. However, considering that most of the arcade centers shutting down have been due to growing financial concerns in the wake of the pandemic, and the fact that crane games might be more profitable than other arcade games, it only makes sense for the team to focus on them in this first leg of the project. And yes, we specifically said “first leg” because, according to Genda, this is the first part of the company’s “Ikebukuro Project”, which means that there will surely be more arcade centers popping in the future.

We can only hope that, if this happens, and Genda Sega Entertainment actually starts pumping more life into the Japanese arcade industry, that they return to form and start creating multi-story arcades where each floor is dedicated to a specific theme or type of gaming, instead of leaning heavily towards one of them across the entire facility. But we guess only time will tell!