Though a lot of us are still reeling from the unfortunate closure of the SEGA Arcade in Akihabara, not everything is bad as the arcade gaming industry is still finding a way to survive in the electronic, anime, and gaming capital of Japan. Case in point, the first ever arcade bar to obtain official licensing for a number of their games has just opened its doors in Tokyo, offering everyone a palace to unwind, have a few drinks, and enjoy a few rounds of several numerous arcade titles.

Now, this may not sound like news, in particular, since it’s not really uncommon seeing a few games in a bar, especially here in the West where it’s common to see a pinball machine or two in the local watering hole. However, while having a few machines in your establishment is fine, things get complicated when you start adding a larger variety of games from different companies.

This problem reached its boiling point in 2018, when several video game bars in Japan were forced to close their doors due to copyright infringement claims. These businesses had been operating for several years, before getting a notification from the Association of Copyright for Computer Software (ACCS) that they needed to adhere to copyright laws.

Even though the bars were offering free games and only charging for the drinks, they decided to close up shop permanently to avoid consequences. However, not all business owners were as lucky (or compliant) as some of them were arrested for both ignoring the ACCS warnings, and also illegally lending official games to customers.

However, this new bar, called “Tokyo Video Gamers”, does away with all these legal constraints by obtaining licenses for all of their games in question. They also offer the accustomed free video games, while charging only for beverages and other products and services. The games in question are officially licensed by the developers, and include titles from renowned companies such as Arc System Works, SNK, City Connection, G-Mode, Paon DP, and Dotemu SAS. This means that customers will be able to enjoy games and franchises like Metal Slug, Guilty Gear, King of Fighters, Golden Axe, Fantasy Zone, and countless more. 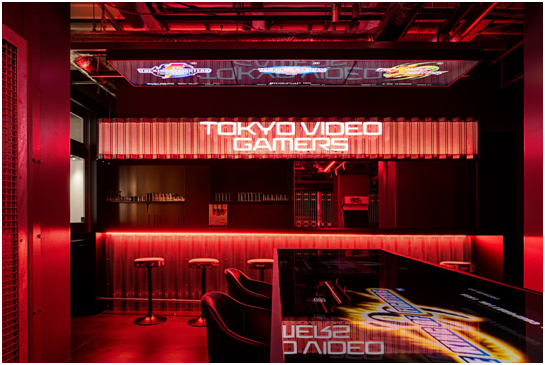 While the closure of the bars several years back set a bad precedent for video game bars in Japan, it seems that the folks at Tokyo Video Gamers are trying to do things the right way this time. The fact that game companies are open to license their games to these establishments opens the way for others that would want to dip their toes in this industry. As some would say, “Rome wasn’t built in a day.” We hope that this new business finds success and sets the field for a new outlet for the industry.

Check out the bar’s official website to learn more about the venue and the services that they offer. Additionally, feel free to follow their Twitter account to keep up to date with their events and news.