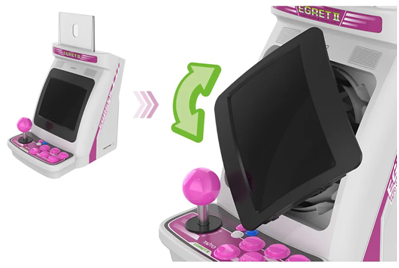 The lockdowns and the quarantines have greatly affected certain industries and businesses, particularly those involved with Out-of-Home Entertainment. For arcade game manufacturers, this means that sales have dropped to all-time lows as FECs, their main clientele, have been  closed for extended periods of time – some closing permanently. The Japanese arcade sector has been hit particularly hard, and many are wondering if there will be any arcades left in Japan once the pandemic ends.

While FEC sales might have dwindled during the pandemic, some companies have opted to develop arcade-related products that could be used by the end-users directly, without having to hit up the local arcade. Most of these products revolve around miniature versions of popular machines of the past, which not only take up much less space than their full-sized counterparts, but also that offer connectivity features that would let users hook them up to their HDTVs at home and enjoy some awesome arcade goodness.  From the Sega Astro City Mini, Capcom’s Home Arcade and Retro Station consoles, and the Legends Core home console, among others, there are plenty of options for arcade gamers to enjoy their favorite titles from the comfort of their living room couch. 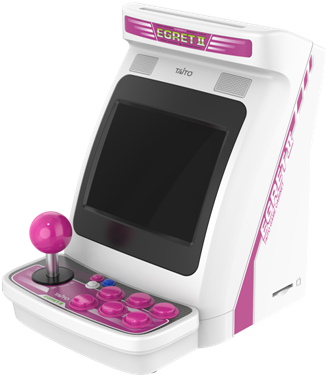 However, in a surprising twist, the latest company to join the miniature arcade craze seems to be none other than Taito, with their Egret II Mini. Based upon Taito’s own Egret II candy cab design, this particular product carries a similar design to the Astro City Mini. In fact, excluding the different color palette, we’d daresay that, at a glance, it’s almost the same console, featuring a slightly larger 5” LCD screen, and the same layout for the controls, consisting of six buttons and a joystick.

However, the devil’s in the details, and the Egret II Mini has lots of those hidden beneath the surface. For instance, while the 4:3 screen comes in a panoramic orientation, it can be rotated into a portrait mode, which is crucial for enjoying games like Space Invaders, which are designed to be played in this orientation. Furthermore, Taito is also offering an optional controller with a trackball and paddle input, which are used in games like Arkanoid, Syvalion, Plump Pop, and Cameltry, among others. The Egret II Mini comes with 40 games preloaded, which won’t require the optional controller. However, the trackball and paddle controller comes with an SD slot and an SD card with ten games that use these specificl controls.

Some of the games included in the Egret II Mini include the following:

Check out their product page to get a better glance of the games available on the home console.

Like with the other mini arcade cabinets we’ve talked about in the past, the Egret II Mini features a USB-C port for power, as well as an HDMI output for hooking it up to any HDTV or similar display, alongside a headphone jack for those who enjoy immersing themselves in the cacophonous beeps and boops of their arcade games.

The Egret II Mini is expected to launch on March 2nd, 2022, with an MSRP of 18,678 yen, or about $170 USD which is already pretty expensive, compared to other arcade home consoles. However, the optional expansion controller commands a hefty fee as well, costing 12,078 yen or around $110. In this sense, those who want to get the full experience of their Taito home console will need to shell out about $300 USD, and this is without including additional controllers, in case you want to play with friends. There are, however, two limited-time bundles: the first one is 49,478 yen, or around $450, and includes everything, plus some extra goodies like soundtrack CDs; and a second bundle that costs 32,978 yen, or around $300, and includes the extra goodies, but without the optional controllers.