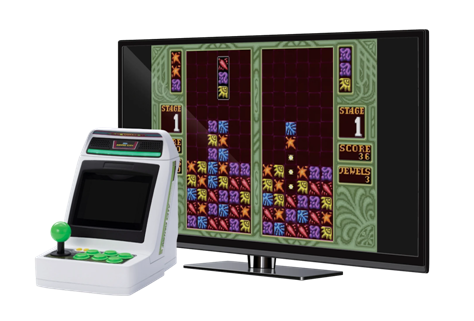 In these times where people have been spending more time at home, game companies have been finding ways to tap into buyer nostalgia, taking advantage of beloved games from the 80s & 90s. With the closure of many arcades & FECs around the world due to the ongoing lockdown measures, arcade game manufacturers and designer companies have been appealing directly to the consumers, mostly in the form of developing mini console versions of their popular cabinets.

From Numskull’s series of Quarter Arcade cabinets, and New Wave Toys’ RepliCade series of games, to Capcom’s Retro Station home console, and AtGames’ “Legends Core” console, among countless others, it seems that the current common denominator is to appeal to the user who is stuck at home, itching to get their fix of arcade bliss. We really can’t complain since more games equals more fun, although we admit that we’re worried about the long-term effects of these ongoing lockdowns over businesses and industries both local and abroad.

Today, another miniature console is joining the ranks with the Astro City Mini Console, the product of a collaboration between SEGA and Funstock, and as part of the former’s 60th anniversary. Like its name suggests, this new console is a replica of the original Japanese gaming system, but at a 1/6 scale and featuring controls only for one player instead of the original two sets of joysticks and buttons. 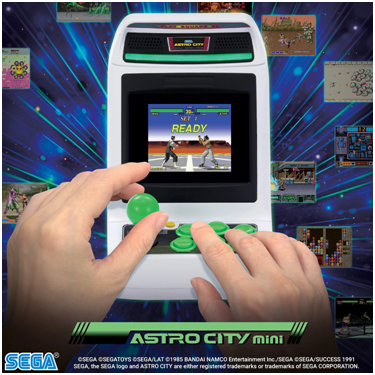 The console itself comes with 37 pre-loaded SEGA classics, including Virtua Fighter, Golden Axe, Space Harrier, Fantasy Zone, Altered Beast, and Puyo Puyo 1 and 2, among others. One of those titles is known as Dottori Kun, a game that was created solely for the purpose of testing at Sega, never intended for public arcade consumption. It’s worth noting, however, that some of these games are not localized entirely and feature most of their text in their original Japanese. Fortunately those particular titles have had some of their most important texts translated, such as controls and menus, so they’re quite playable even in their current state.

The SEGA Astro City Mini console is made almost entirely out of resin, and features a functional 4-inch LCD screen, as well as the aforementioned joystick and 6 buttons. Though the screen can be quite small for prolonged gaming sessions, the console also has an HDMI out port so that you can hook it up to any HDTV and continue playing on your large display—the games are optimized to be played flawlessly in higher resolutions.

This miniature console is already available for preorder on Funstock’s website, with an MSRP of just under $180, and with shipping to anywhere in the world. The console itself, however, is expected to release on May 28th. As usual, if you’re interested in acquiring one for yourself, it’s better if you don’t wait as these pre-orders tend to run out of stock very quickly and whether or not they restock is always a coin flip.