Hello once again, dear readers! Let’s dive into the latest updates in the arcade industry. Today, we’ve come to reiterate the time where we wrote about the Capcom Home Arcade. A few months back in April, we shared the news where the game studio famous for several awesome franchises like Resident Evil, Devil May Cry, and Street Fighter, to name a few, was making its first venture into the home arcade industry.

This project is the aptly-named Capcom Home Arcade, and consists of a console modeled in the shape of the Capcom logo, but scaled to ridiculous proportions. The controls are built into the console itself, which is meant to sit on the player’s lap—or perhaps on a table or desk—while he plays. Moreover, the console comes with two sets of controllers, for the times when the users want to engage in co-op or versus games. The console is long enough so that two players can sit side-by-side and game comfortably, just like in an arcade cabinet.

At the moment when we first wrote about this endeavor, we said the following:

“The Capcom Home Arcade is, quite simply, a plug ‘n play console, albeit possibly one of the best plug ‘n play consoles, to date. Given that the company never released a home console of their own, instead developing hardware and making a name for themselves in arcades, the console is a uniquely-designed arcade stick. In the company’s reveal, we saw that the device consisted of a large slab in the shape of the company logo, with two sets of controls on each side so that up to two players can join in on the fun. The console itself looks really nice, with an attractive glossy finish that highlights the quality of its build.”

The completed product retained this design from the initial reveals, which is fine by us since the console both plays and feels like the controls that you find with a genuine arcade cabinet, only that you plug it into your TV and is much (MUCH!) less expensive than a full stand-up machine. However, when we first wrote about this product, we didn’t actually know what games the Capcom Home Arcade would feature. Fortunately, Koch Media, the manufacturer of the console, released a statement a few weeks ago where they shared all the nitty-gritty details about this product.

The Capcom Home Arcade comes with 16 of Capcom’s most popular arcade titles, including:

Feel free to visit the project’s website if you wish to learn more about ordering your own Capcom Home Arcade. Alternatively, here’s the launch trailer for the console:

And speaking of home versions of beloved arcade titles, Arcade1up just released their own Star Wars home console. While not a home console in the sense that it’s a small box that you hook to your TV, the Star Wars At-Home Arcade is a smaller version of a traditional arcade cabinet, standing at just over 5 feet. 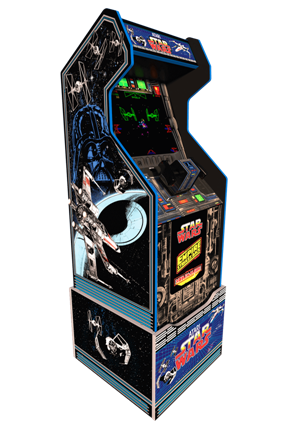 The cabinet comes preloaded with 3 popular Star Wars arcade titles, and while the press release didn’t specify which ones, we can see what they are from the image on the front of the cabinet itself. They were pulled (and licensed) from the trifecta of Atari developed games of the 1980s: the original Star Wars (1983), Star Wars: The Empire Strikes Back (1985) and Star Wars: Return of the Jedi (1984).

The best part about this game, however, has to be its price. Instead of spending thousands of dollars on the three original cabinets, the Star Wars At-Home Arcade goes for only $450 and is available on Wal-Mart and Gamestop. Given that the original Star Wars tends to fetch over $2000 and the other two games also go for a premium (and are rare), you’re saving a pretty penny this way. If you ever wanted your very own Star Wars arcade games on your home but didn’t quite have the budget for it, then now’s the perfect time to snag your very own cabinet.