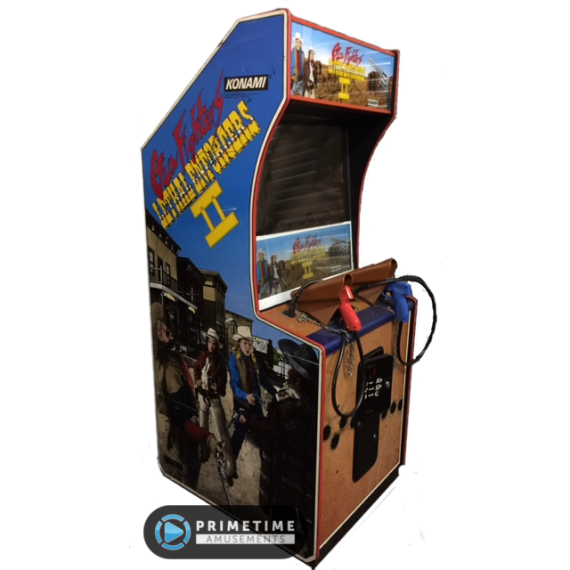 Travel back to the Wild West of 1873 to a larger and more lifelike gunfighting experience in Konami’s Lethal Enforcers II – Gun Fighters.

This time the villains are badder than the baddest and uglier than the ugliest as they try to rob some banks, holdup a stagecoach and rob a train or two. This means that while technically a sequel to Lethal Enforcers, it is a prequel as far as the timeline is concerned. As you fight through the five stages, you must avoid shooting the innocents caught up in the crossfire while keeping your aim straight to achieve the rank of U.S. Marshal. Find new weapons as you progress, which help make the fight a little easier. This game is packed with two player action and addictive game play

– While the game was ported to some game consoles in the 90s, it is not presently available on modern platforms

– Hunt down fugitives and outlaws across five total stages: “The Bank Robbery”, “The Stage-Holdup”, “Saloon Showdown”, “The Train Robbery”, and “The Hide-Out”

– “Carnage Mode” can be turned on/off with a DIP switch

– Konami’s Lethal Enforcers II is no longer produced, having been released in 1994. Please call us about current availability. All used models pass through PrimeTime Amusement’s “Certified Pre-Owned” program, which guarantees that the game will be completely refurbished and ready to operate upon arrival.

Here’s the attract mode from the original game: