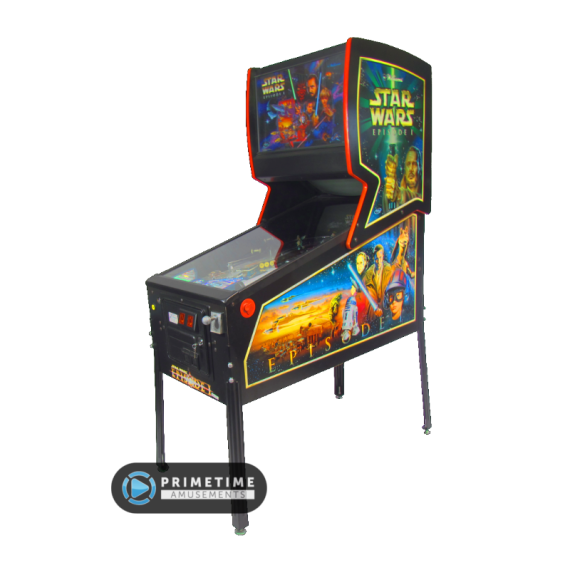 You won’t have to travel to a galaxy far, far away to enjoy this revolutionary advance in pinball gaming, it’s the Star Wars Episode I pinball machine by Williams!

As the second and final game in the Pinball 2000 series, this game features technology that mixes actual sound and video from the movie in a striking way to create the most explosive gameplay in the galaxy. This is achieved by the unique cabinet design that places a full color monitor screen above the playfield inside of that backbox. That backbox hangs over the upper portion of the playfield, the reflection of the image creating a mesmerizing psuedo-holographic special effect. Targets and ramps are placed at the back to correspond with the virtual targets, creating a style of pinball that is unlike anything else in gaming

Players mush progress through 13 different game sequences on their journey to be come Jedi Masters, culminating in a lightsaber duel with the Sith, Darth Maul. This is further enhanced by a second button that is at your fingertips, the ‘Action’ button. That button allows you to activate events such as firing lasers or torpedoes, choosing the movie scene and more. Challenging, adventurous and visually captivating, this pinball masterpiece is a must have for any Star Wars fan (regardless your feelings on the movie itself 😉 ) !

– Designed by John Popadiuk (designer of Theatre of Magic, Circus Voltaire, Tales of the Arabian Nights and others)

– Play through 13 scenes on your quest to become a true Jedi Master, culminating in a lightsaber battle with the skilled Darth Maul

– Full color CRT monitor is located inside of the backbox; ask about conversion to a more reliable and safer LCD!

– William’s Star Wars Episode I pinball is no longer in production, having been released in 1999. Please call us about availability. All used models pass through PrimeTime Amusement’s “Certified Pre-Owned” program, which guarantees that the game will be completely refurbished and ready to operate upon arrival.