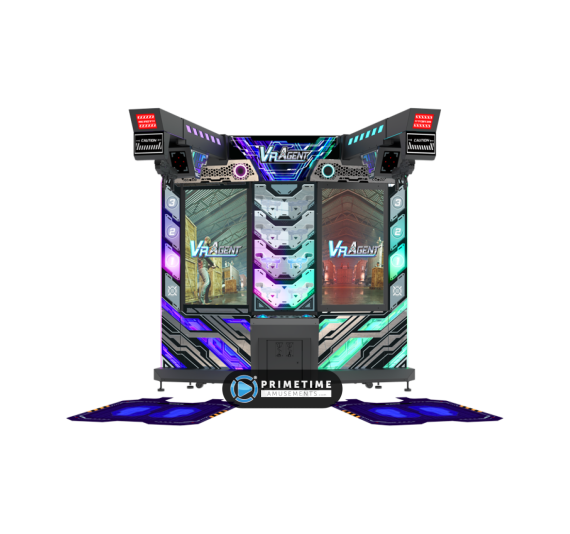 Become a special agent fighting off hordes of terrorists in VR Agent by 3MindWave and Sega Amusements!

VR Agent marks one of the first forays of Sega into virtual reality action. In this game, you play as one of four secret agents on a dangerous mission. Using the unique light-gun controller, take on the missions, use a variety of cool weapons, eliminate the bad guys and get the high score!

The control and interactivity setup on this game is what really sets it apart. As the name of the game implies, it does use VR, but it does so in a new way. When the game begins, an attached light-gun lowers down to the player’s level. This gun features the triggers for interacting with the game, but it also has a VR headset attached to the back of it. Players place the headset up to their face, where they then witness all of the action. A sensor net also tracks the movement of the player’s body, translating that into the game. This allows you to lean around corners and immerse yourself into the action.

Check out VR Agent from this manufacturer made teaser trailer. We will have our own video of this in action soon!

– Designed by the same team that created ATV Slam for Sega

– Active gameplay is streamed to the 43″ vertically-mounted HD screen

– The play is similar to that of popular first-person shooters; 5 missions to play

– Easy to use light-gun with firing trigger and reload button

– Air jet force feedback – blows a jet of air at you when you’re hit by an enemy!

– Link 2 units together for 4-player excitement