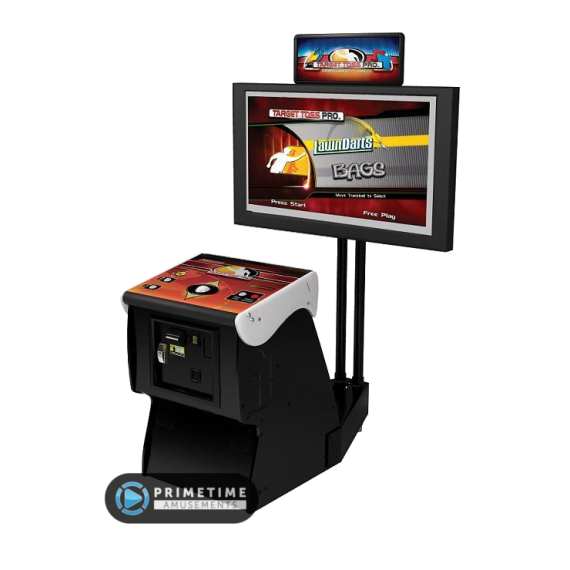 You’ve golfed and you’ve bowled with Incredible Technologies, now it is time to toss with Target Toss Pro!

Target Toss Pro is an approachable bean bag tossing game that offers fun casual gameplay and competition for everyone. “Bags”, (or “Cornhole”, depending on your region) is a deceptively simple yet very competitive game. The object is to use the trackball to toss bags onto or into into box at the end. The bags in or closest to the target win the most points. It’s fun, easy and gets all players involved immediately, plus keeps them coming back for more

The game also includes a variation on Bags that as a physical game has been banned in certain areas, known as “the world’s most dangerous game” – Lawn Darts! Instead of tossing bean bags at targets, you toss giant darts, aiming for the center with all of your shots. Lawn Darts also introduced an option for ‘profane’ rough talk, simulating your swearing uncle who would play lawn darts with you. That can be deactivated by the operator, allowing the game to be tailored to the location.

– Fine tuned yet rugged trackball is used to simulate each toss

– Use your own HDTV! Original models could use the IT Monitor mount or have the monitor mounted to a wall.

– Incredible Technologies’s Target Toss Pro is no longer produced, having been released in 2009. Please call us about availability. All used models pass through PrimeTime Amusement’s “Certified Pre-Owned” program, which guarantees that the game will be completely refurbished and ready to operate upon arrival.

Check out Lawn Darts from this manufacturer produced trailer: