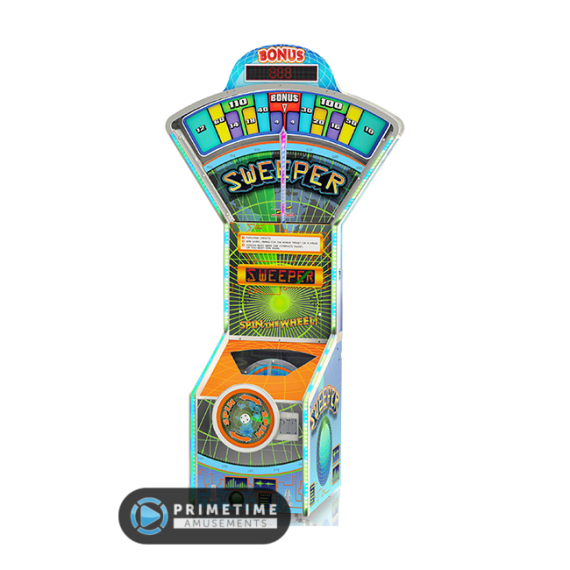 Sweeper XL is another great concept from the redemption wizards at Benchmark Games.

Playing Sweeper is a cinch. All you need to do is insert a credit then aim the arrow before spinning the giant wheel at the front of the game. The giant, LED infused arrow at the top of the game will then begin to sweep back-and-forth between a variety of potential ticket values. These values range between 4 and 110 tickets, with a progressive bonus jackpot up for grabs!  Cascading LED lights and a pulsing soundtrack elevate the excitement of Sweeper to staggering heights.

Check out the XL model in action from IAAPA 2015

This is available in two models – this listing is for the XL model which is 12′ 6″ tall; the smaller LG model can be found here.

– XL model designed tower above the competition with a bigger size and bigger earnings!

– Super easy to play – just spin the giant wheel at the front!

– LED lighting throughout the game further enhances the effect; multicolor LEDs are placed inside of the arrow.

– Multiple ticket values to play for including the progressive BONUS which is shown via the red LED display at the top.