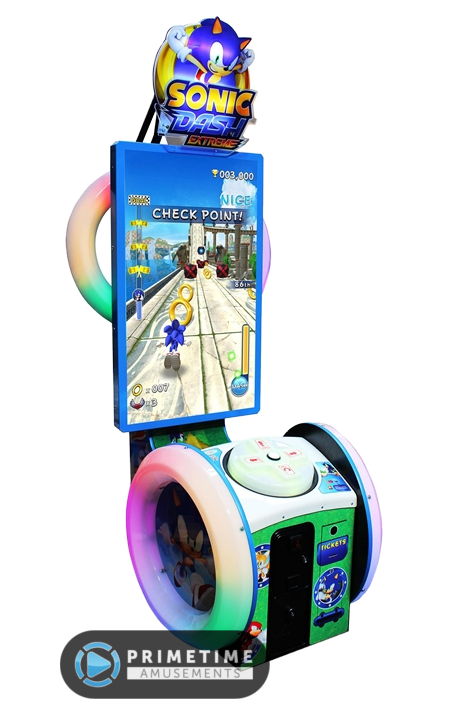 As one of the most recognizable characters in the world, Sonic The Hedgehog has long been the symbol of Sega’s prowess in the video game business. Now he is back in arcades in this exciting new app-to-arcade port that takes Sonic Dash and makes it Extreme!

Sonic Dash Extreme is an “endless runner” style game that fits perfectly with the Sonic series of games. With the view directly behind your character, speed along treacherous paths which are riddled with golden rings, collecting them for points and for tickets! You must dodge enemies, jump over obstacles and ultimately face Sonic’s nemesis, Dr. Eggman, at the end of each level.

Check out Sonic Dash Extreme in action from IAAPA 2015

Sonic Dash Extreme stands out from the mobile version by offering a 55″ vertically mounted screen and a unique giant “D-Pad” control. The control pad allows users to dodge, slide, jump and dash along each level.

– Stars one of the world’s most recognizable characters, Sonic The Hedgehog and his friends

– Three levels to dash on: Grass, Beach and Temple

– Play for tickets (default setting) or just play for points!