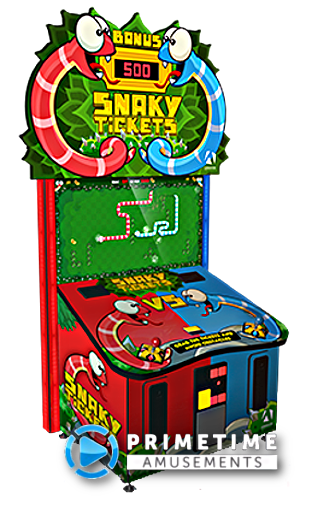 Most gamers may not remember too many game releases from 1976 apart from Atari’s Breakout but there was another title released that year which would have a big effect on gaming at the time. Called Blockade by Gremlin, the simple style of play featured the idea of two light-walls (or snakes if you prefer) being drawn by the player or the computer on the screen. Your goal was to outlast your opponent and possibly make them run into your wall. After Blockade was released, several games just like it came along (including the famous ‘Snake’ game for graphics calculators) and the idea was further given attention when Disney’s TRON would feature a similar game concept with their light-cycles.

Fast forward to today and the concept is still fun to play – it just needed a modern coat of paint! Enter in Snaky Tickets. Using a similar idea of old, you control either a blue or a red snake in a single screen arena filled with spikey balls and tickets. Eat the tickets to grow and win bigger values. The longer you last the more you can win. For more fun, add a second player and see who comes out on top!

– Attractive cabinet with bold colors and an inviting marquee

– Easy to use joystick controls

– Ticket dispensers (1 for each player) included