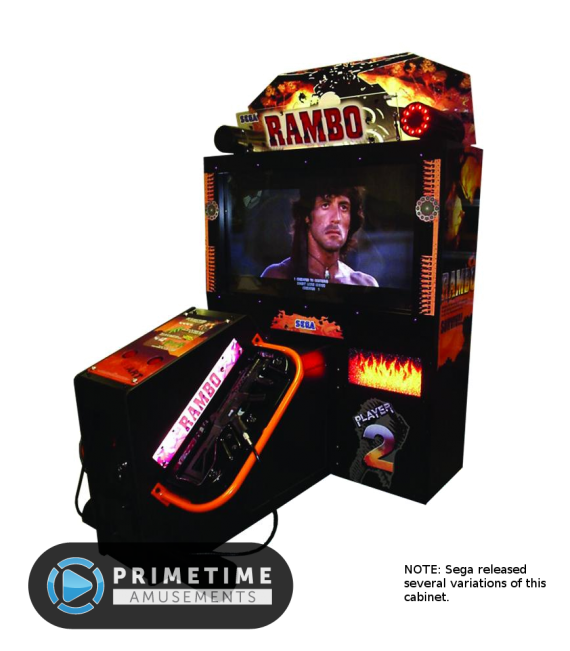 Based upon elements from the first three Rambo films ( ‘First Blood (1982)’, ‘First Blood – Part II (1985)’, and ‘Rambo III (1988)), you are fighting for personal freedom as well as seeking to rescue prisoners. As you play, a clock shows how soon an enemy will attack. You are rewarded for quick kills. The Rage Meter also builds throughout the level and when active, you become invincible in a way that only Rambo can be while the rage dissipates.

The standard game shown above is equipped with a large 60″ DLP monitor and two “machine-gun” style weapons that are similar in style to what Sega used with GHOST Squad Evolution.

– Arcade exclusive light-gun adventure based upon the iconic Rambo film franchise from the 80s.

– The game integrates certain live action clips from the films

– Attack gauge appears above enemies to alert you as to when they will fire.

– This is no longer produced and is only available as a “Certified Pre-Owned” game. Please call for availability. All used units are fully refurbished meaning that they will be ready to operate once it arrives at your location. With a 30 day warranty on all used games, you can buy or rent with peace of mind.