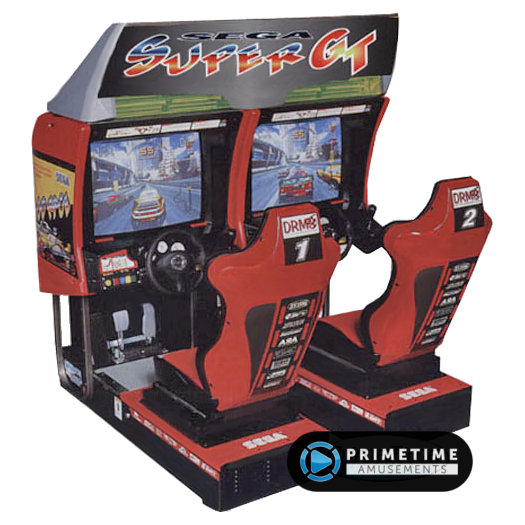 Also known as Scud Race, Sega Super GT is a pseudo-sequel to the legendary Daytona USA.

Instead of stock car type racing, Super GT allows the player to race in highly valued race cars such as the Dodge Viper, Porsche 911 GT2, Ferrari F40 or McLaren F1! Each vehicle has its own top speed and handling style. True to arcade form, the handling for these vehicles is not quite a simulated, realistic experience – instead they designed it to handle the way a non-professional driver would want it to handle. It also has four courses: Classic Castle, Mystery Ruins,  Twilight Airport and Dolphin Tunnel. Each track has it’s own unique features and difficulty.  Utilizing state of the art Model 3 CG board, ultra-realistic feedback steering system, explosive crashes and adrenaline-filled gameplay, four speed stick shift for tire-squealing racing and a multi-speaker sound system delivers music and sound effects from dash-board and seat speakers.

– Graphics scream along at 1 million polygons per second, 60 frames per second via the Model 3 hardware

– Originally produced in standard Twin sit-down (26″ CRT) and Deluxe (50″ projection) models. Ask about upgrading the monitor to an LCD.

– Connect up to four units together for multiplayer fun

– Sega’s Super GT/Scud Race is no longer produced, having been released in 1996. Please call us about availability. All used models pass through PrimeTime Amusement’s “Certified Pre-Owned” program, which guarantees that the game will be completely refurbished and ready to operate upon arrival.