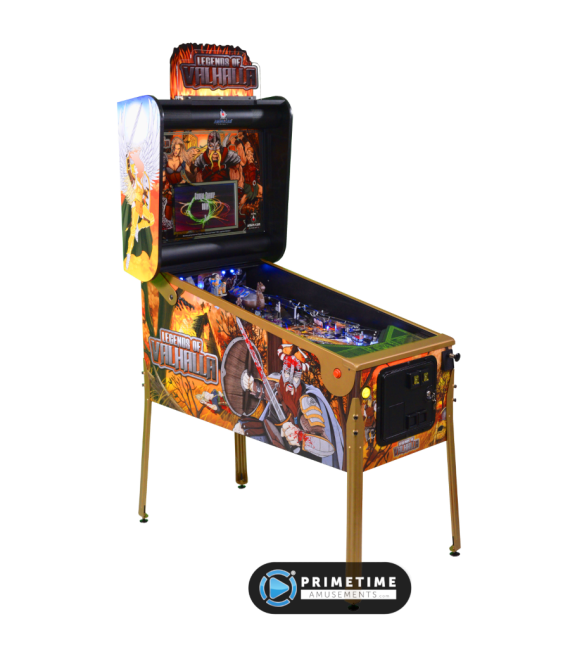 (NOTE: The product photo above shows the Deluxe Edition. We will switch it out with the Classic Edition, once that is made available)

Are you prepared to take on legendary creatures from ancient Viking lore?

The Legends of Valhalla pinball game is an original creation by Riot Pinball and is being produced by American Pinball. This marks the latter company’s fourth title, following the release of Hot Wheels in 2020.

In Legends of Valhalla, the player becomes a Viking Warrior on a quest to Ragnarok (“The End of the World”), proving their worth to enter into Valhalla. The game comes with 16 unique battle modes, which are a part of the overall 22 game modes, that will test the player’s mettle and might, facing off against infamous monsters such as the Kraken. Build an army of Vikings, call upon the Valkyries and even Thor’s Hammer to assist you in your sacred quest.

This listing is for the Classic Edition of the game; It was also produced in a limited run Deluxe model, but those sold out within 24 hours of the game announcement. Classic units will begin shipping once all Deluxe units have shipped from the factory, but orders can be placed at any time!

Check out the Deluxe model of the game as seen at IAAPA 2021. Video is available in crisp 4K Ultra HD resolution. Subscribe to us on YouTube to be alerted of additional video updates!

– American’s 4th title, based upon a wholly original design

– Fantastic hand-drawn artwork (Note: The art does feature some blood, but no gore)

– Various sculpted toys, including a Viking war barge and pile of skulls (Odin figure is for Deluxe models only)

– Scoring & graphics are displayed on a center-mounted 15.6″ HD LCD screen within the backbox

– 23 licensed music tracks from the synthrock band, Two Steps from Hell are pumped through 4 stereo speakers plus the 8” cabinet subwoofer

– Various operator options to tailor the game to your location; Free play for home built-in