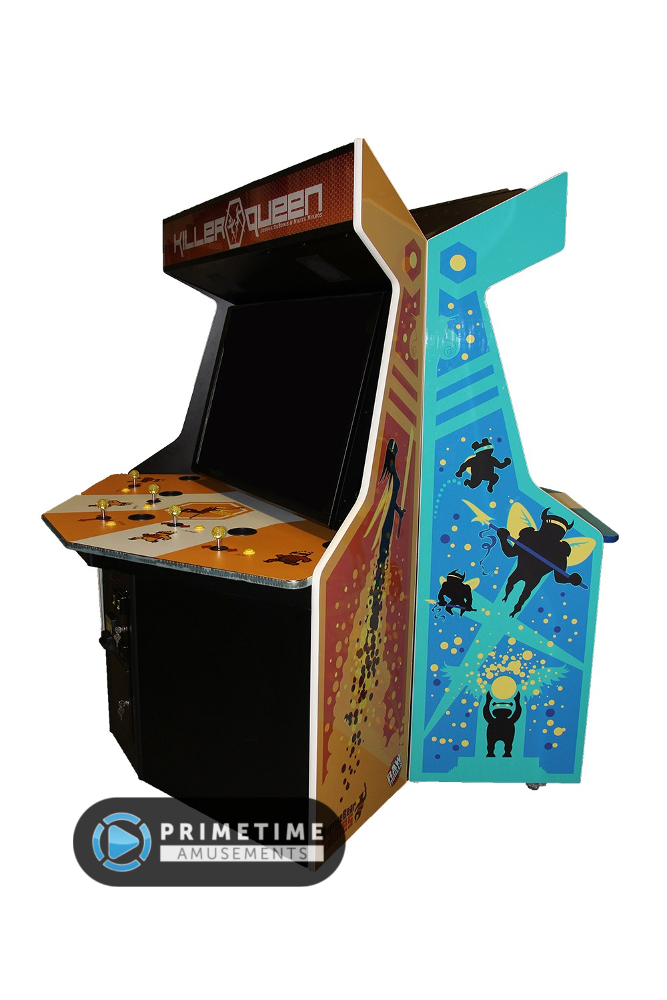 What do snails, bears & bumblebees have in common? Virtually nothing…unless you are playing Killer Queen Arcade by BumbleBear Games and Raw Thrills.

Billed as the world’s only 10-player strategy arcade game, you and nine other friends can come together for an epic battle in the 8-bit garden. Featuring two cabinets (that can be placed back-to-back or side-to-side), a Killer Queen makes for a striking setup in any arcade or FEC where it is placed. Each cabinet features five player positions with a simple arcade joystick and a button, with the center player taking upon themselves the role of the team’s queen. The other four players take up roles as the bears; Queens have the option to flap while bears have the ability to jump around the arena.

You can win by: Bringing the Snail God home; filling your hive with nectar or execute a “triple assassination” the opposing team’s Queen. While none of these options are an easy task by default, if you work together with a smart strategy then victory is all but assured.

While the premise behind Killer Queen Arcade is radically different from any other game on the market, venues that have one installed and bill it as a tournament piece have seen amazing earnings and solid customer loyalty. Each purchase of a Killer Queen pair includes a LEague Start-up kit so you can get the competition scene going in your area!

– Unique, skill and strategy based gameplay that once learned becomes addictive to play

– Vacant player spots are filled by the computer

– The 80s style graphics are displayed on a 47″ HD screen

– Awesome retro style artwork on the sides and control panel

Check out how to play Killer Queen Arcade thanks to this tutorial put together by Up-Down Arcade Bar: