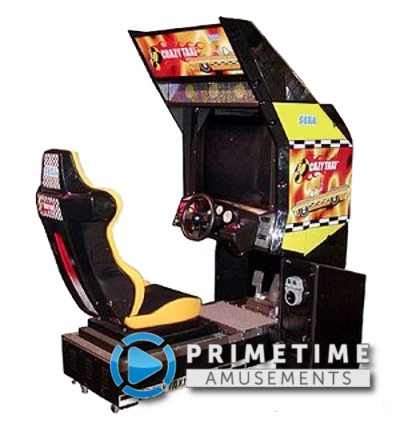 In the late 1990s, Sega created several titles that fit into what they called their “Professional Series” of arcade games. These were simulators of real world careers, developed to show the benefits of an arcade simulator over a home controller. Out of all of the Professional Series titles that were developed, Crazy Taxi stands out for it’s twisted take on taxi driving!

There are four drivers to choose from when you first begin a game: Axel, B.D. Joe, Gena and Gus. After you’ve made your selection, you then begin to drive around the sunny blue sky city in search of customers who need a ride. These are shown by the red, yellow or green circles that they are standing in. Brake to pick them up and then the fun really begins as you need to get them to their destination before the timer runs out! Pull off stunts and drive like crazy to ‘earn money’ (i.e. points for your score). Can you earn a CRAZY! License at the end?

– Sega’s Crazy Taxi is no longer produced, having been released in 1999. Please call us about availability. All used models pass through PrimeTime Amusement’s “Certified Pre-Owned” program, which guarantees that the game will be completely refurbished and ready to operate upon arrival.