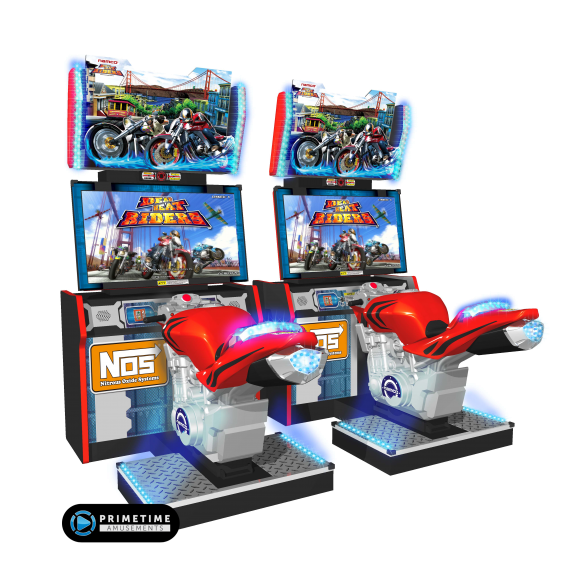 Hop on your bike to race through 4 incredibly detailed cities, which were personally surveyed by the development team. Just like the Dead Heat street racing game, zoom through the streets of New York, Chicago, London and San Francisco but now on different courses through each city. Select from 5 different superbikes as you ride on a recreated motorcycle swivel seat.

Another great feature is found with Namco’s patented software technology that analyses and stores registered players driving styles, later mimicking registered players as “ghost drivers”. This allows current players to race against previous drives, even when they are not around.

This title also features a completely revamped soundtrack, designed to match the white knuckle intensity of each race.

Enjoy more social racing with the Integrated Camera! This takes a picture of the players and uses that photo to identify your car and other players you are racing against in real-time during the race.

– Exclusive to arcades: Not available anywhere but the arcade!

– AI system designed to make each race a nail-biter; the game will record your performance for use in future races by other riders

– Link up to four units!

– Bandai Namco’s Dead Heat is no longer produced, having been released in 2012. Please call us about availability. All used models pass through PrimeTime Amusement’s “Certified Pre-Owned” program, which guarantees that the game will be completely refurbished and ready to operate upon arrival.