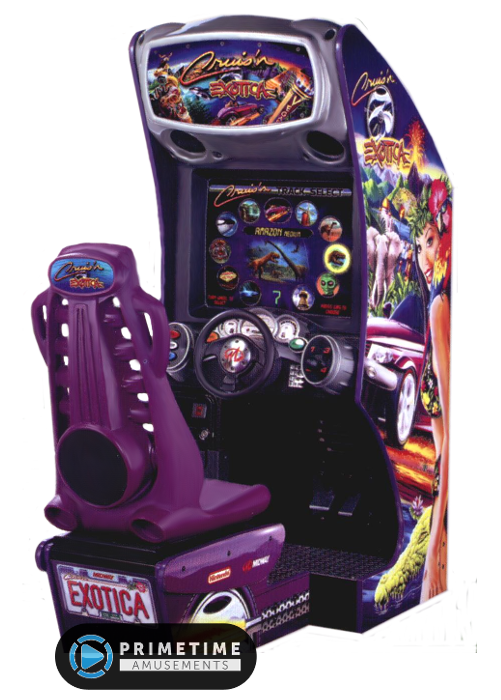 The third in the ever-popular Cruis’n Series by Midway and Nintendo, Cruis’n Exotica takes you to even more exciting places with new cars &  tricks, crazy new tracks, killer graphics and more fun.

There are twelve tracks to choose from including the mythical depths of Atlantis, the sweltering jungle of the Amazon, the spectacle of Las Vegas to the dusty canyons of Mars and everywhere in-between.  The game cabinet was re-designed from the USA & World models to draw better attention to the game, with a wider control panel that incorporates a PIN keypad that players can use to save their progress. It also features the triple view options and a four speed shifter.  Produced in two models, a 27″ and a 39″ deluxe, you can connect four Exotica units together to tap into that competitive racing spirit.

– 3rd in the world famous and high earning Cruis’n series

– 12 tracks to choose from that covers several fantastic locations

– Improved sound system with a larger subwoofer built into the seat

– Keypad PIN system to save progress

– Produced in 27″ and 39″ monitor size models. Ask about upgrading to a modern LCD!

– Midway’s Cruis’n Exotica is no longer produced, having been released in 1999. Please call us about availability. All used models pass through PrimeTime Amusement’s “Certified Pre-Owned” program, which guarantees that the game will be completely refurbished and ready to operate upon arrival.

Looking For Other Games In The Cruis’n Series?

Cruis’n Blast (Newest in the series!)