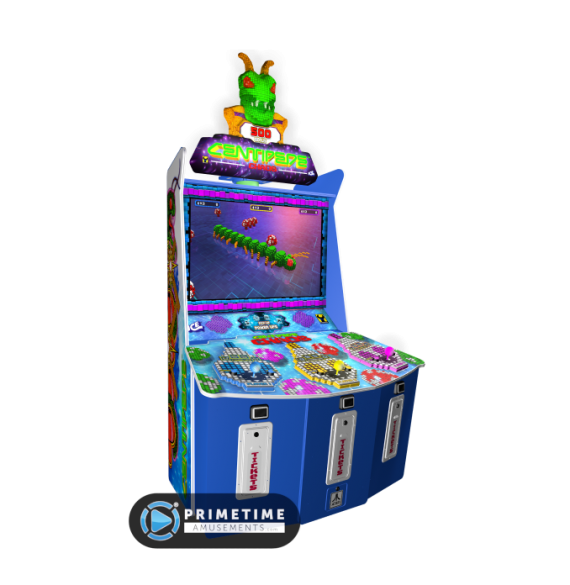 Centipede is back and bigger than ever in an exclusive form only to be found in arcades with Centipede Chaos by ICE, Play Mechanix and Raw Thrills. This listing is for the Standup model.

Originally released in 1981, Centipede went on to become Atari’s biggest hit behind Asteroids, selling over 50,000 units in it’s lifetime. The game was ported to numerous home systems, and has occasionally received a reboot over the years on somewhat more modern consoles. Audiences old and new recognize it, as it stands as one of the true classics of the “Golden Age” of video games.

Centipede Chaos is a fresh take on the concept, marking the first time that a new Centipede game has been seen in arcades since the sequel known as Millipede was launched by Atari in 1982. Players battle hordes of bugs and the centipede itself over many waves of action-packed blasting. Every fifth wave, you’ll face a Boss Battle against a giant bug. The more you critters you blast, the more you win! Default settings has this playing for tickets; operators can change it to Amusement Mode, where the game can be played just for points.

Check out the Standup model of Centipede Chaos from this video shot at IAAPA Expo 2019. Video available in 4K UHD; subscribe to us on YouTube to stay up-to-date with the latest product videos!

Centipede Chaos was first designed in a Deluxe cabinet; This Standup version plays exactly the same as that one, it just comes in a smaller cabinet that can fit into more locations.

– An arcade exclusive return to a beloved arcade classic from Atari

– Developed by ICE partners Play Mechanix & Raw Thrills, where were also responsible for hits like Kung Fu Panda Dojo Mojo and Deal or No Deal.

– Supports 1-3 players at the same time!

– 20 Waves of retro-fused, bug-blasting combat with huge bosses standing in your way.

– Many unique waves to keep gameplay fresh and interesting

– Set to ticket redemption mode by default; points-only Amusement Mode can be set by the operator.