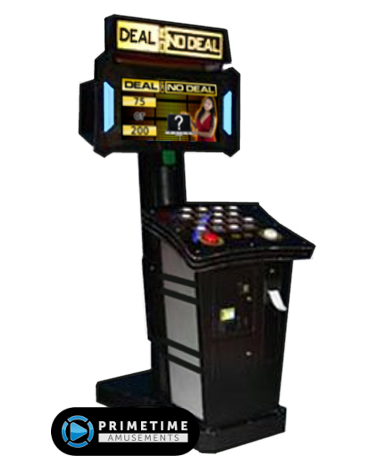 Deal Or No Deal! Street Version

CALL FOR PRICE ON USED UNITS

Deal or No Deal is an officially licensed video redemption game that comes complete with all the authentic nuances of the popular TV game show. This makes each player feel as if they are really part of the game! Just like that show, you choose your case in hopes of having the highest point value on the board. You then eliminate cases in each round as prompted until you receive the “OFFER” from the BANKER. You either take the deal or hit the NO DEAL button to continue play in hopes that you have best deal in your case.

The Street Version offers of the most popular video redemption games on the modern arcade market for locations that does not offer ticket redemption. Same excitement, different package!

With adjusted hardware to dispense thermal printed ticket receipts instead of vending cardstock tickets, operators can now bring this popular game to a non-redemption location such as a bar/tavern, bowling center or truck stop. The location possibilities are endless. The game play is still based off of the TV game show where users pick cases in the hopes of keeping the highest value for last.

REFURBISHED STOCK: 5/9/19! – A Deal or No Deal Street Version AND a Deluxe version unit are currently available from a PrimeTime operated location in Florida. Each will go through our Certified Pre-Owned refurbishing program before shipping to you. Please call for pricing and lead time.

– Select different cases with various values, whittling them down until one is left

– Play for points instead of tickets; values are printed on customizable receipt tickets

– Play Mechanix/ICE’s Deal or No Deal games are no longer produced, having been released in 2007. Please call us about availability. All used models pass through PrimeTime Amusement’s “Certified Pre-Owned” program, which guarantees that the game will be completely refurbished and ready to operate upon arrival.

Want to see Deal Or No Deal in person? You can find it at the PrimeTime Arcade inside the X-Treme Action Park in Ft. Lauderdale, FL!

Check out Deal or No Deal in action (NOTE: “MEGA” version, not the street shown):