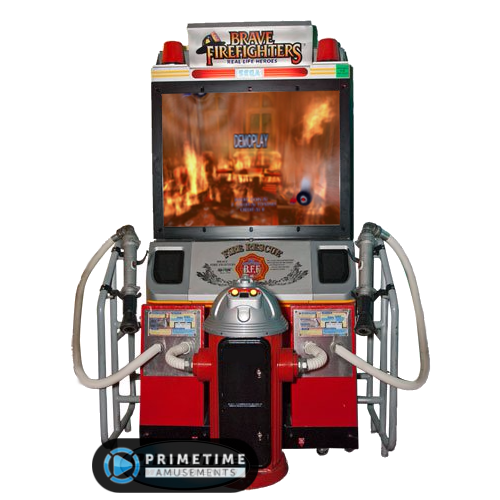 Sega is famous for many titles and unique ideas that shaped the path of where video games have gone. Brave Firefighters is among those innovative titles, putting you into the boots of a firefighter on a mission to save Mayor Taylor, his family and other guests who are trapped in the burning WhiteHead Hotel.

Brave Firefighters follows a formula similar to other arcade first-person light-gun shooters but here you are shooting down the flames using a firehose instead of a gun and bad guys. This is enhanced by the unique firehose controllers that you point at the screen. Each hose device features strong force feedback to replicate the feel of water spraying through a hose! Put out the flames as you locate and rescue guests, confronting dangerous obstacles along the way including heavy smoke, unexpected explosions, falling objects and unpredictable wild conflagrations. It’s about as close to a real fire you can get without singeing your eyebrows.

Check out Brave Firefighters in action

At the time, this game featured some of the most advanced graphics found in gaming, thanks to the powerful Hikaru hardware system. It was designed to create realistic water, smoke and flame effects along with phong shading, a lighting technique that is common today. Brave Firefighters was the first video game to use the technique, home consoles only catching up years later with the Xbox 360.

– Exclusive to arcades. Sega has never released a home version of this game

– Support for 1-2 players with unlimited buy-in

– Race against the clock, putting out flames or removing obstacles

– Sega’s Brave Firefighters is no longer produced, having been released in 1999. Please call us about availability. All used models pass through PrimeTime Amusement’s “Certified Pre-Owned” program, which guarantees that the game will be completely refurbished and ready to operate upon arrival.