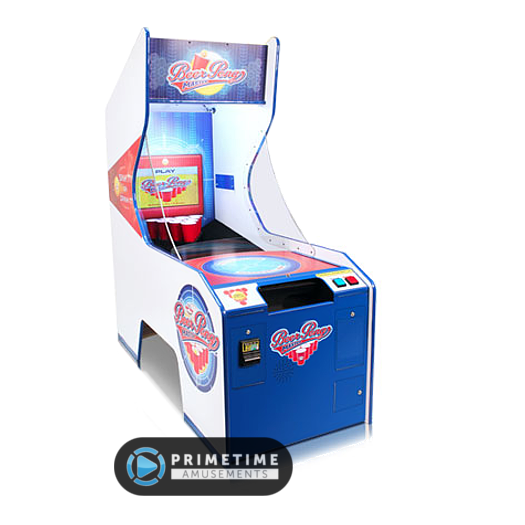 Preceding their Sink-It Shootout design, Beer Pong Master by Bay Tek Games is a self-contained twist on the popular social game of Beer Pong, minus the mess!

All you have to do is bounce or toss the balls into the cups, trying to land a ball in each one, turning off the lights before time runs out. The game features authentic beer pong style cups and uses internal LED lighting inside of each to create an awesome effect that you don’t get out of setting up the college version. The game also uses a 22″ HD screen to show player and scoring information. Encourage friendly competition by offering tournaments to draw a fun and hip crowd!

Check out Beer Pong Master in action from Amusement Expo 2013

– The classic college game comes to the bar or bar/arcade

– Get the ball in all of the cups by the end of the timer for a bonus!

– Bay Tek’s Beer Pong Master is no longer produced, having been released in 2013. Please call us about availability. All used models pass through PrimeTime Amusement’s “Certified Pre-Owned” program, which guarantees that the game will be completely refurbished and ready to operate upon arrival.