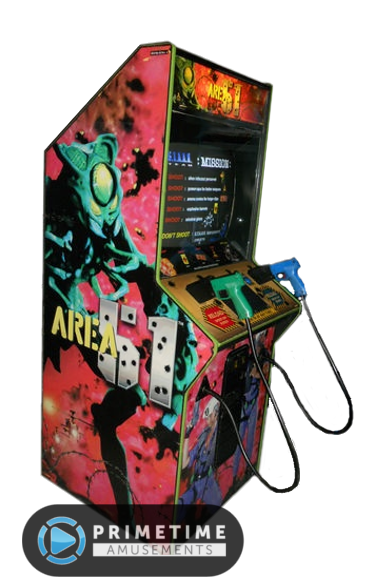 Released in 1995 by Atari Games, Area 51 quickly became a best-seller and a cultural phenomenon. Using stop motion and digitization technologies to create incredible cinematic effects, venues everywhere had to have one. Now you can enjoy the memorable action of this 90s alien shooter, refurbished like new!

The story of Area 51 puts you into the boots of a S.T.A.A.R. (Strategic Tactical Advanced Alien Response) military operative who is tasked with repelling an alien attack at the infamous Area 51 military base in Nevada. Featuring six pulse-pounding levels of action plus hidden bonus rooms and scoring features, this is a timeless classic that players still enjoy today!

– Basic weapon is a pistol; grab machine gun, shotgun and automatic shotgun upgrades as well as grenades! Hold up to 9 grenades at a time.

– Operates on the CoJag hardware (64-bit Atari Jaguar based)

– Pistols can be converted to function with newer HAPP light-gun pistols. Please ask about upgrading

– Area 51 is no longer produced, having been launched in 1995. Atari also produced many upgrade kits for the game to convert other cabinets.  Please call us about availability. All used models pass through PrimeTime Amusement’s “Certified Pre-Owned” program, which guarantees that the game will be completely refurbished and ready to operate upon arrival.