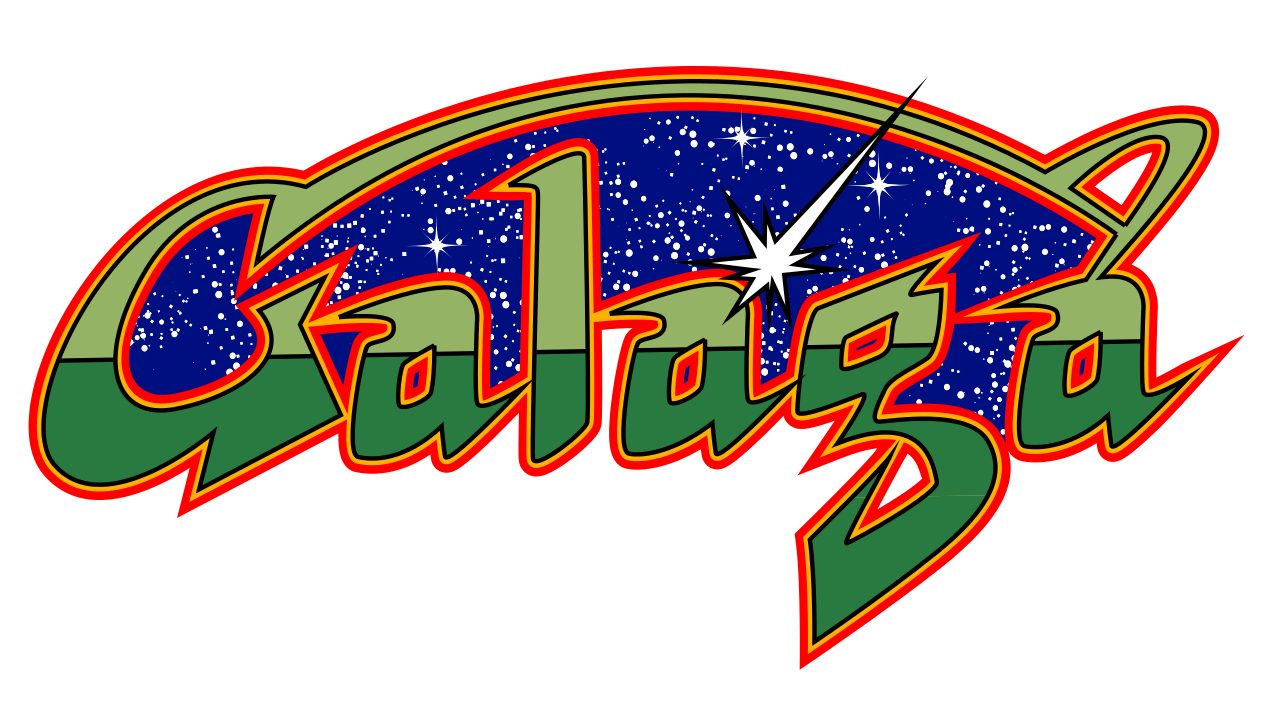 The arrival of Space Invaders in the late 70’s spawned a whole genre of space shooters which, to the wonder of many retro gamers out there, is still very much alive to this day. After the arrival of the iconic space shooter, developers took its formula and kept building on it, creating games that played wildly different than its predecessor. Some of these games were received with great praise, while others were just regarded as novelties, the appeal of which faded shortly and their names along with it.

Some of the awesome space shooter games that were spawned thanks to Space Invaders includes arcade classics like SOS, Space Fever, Galaxian, Ozma Wars, Defender, and Scramble, among many, many others. However, one title stands out to us, in particular, for its unique mechanics and engaging, fast-paced gameplay, Galaga.

Developed and released by Namco in 1981 as a successor to the highly-successful Galaxian, Galaga is one of those space shooters which, like many other titles, are easy to get into, yet very difficult to master. Similar to Space Invaders, the game is played in a fixed screen where the main objective is to destroy wave after wave of aliens. However, unlike Space Invaders, the enemies are much more mobile and swift, and they don’t appear in formation from the beginning of the game. Instead, aliens swoop into the screen bobbing, weaving, and shooting their way into formation. Once formed, the enemies proceed to shoot the player until they are destroyed, after which other waves of aliens take their place. 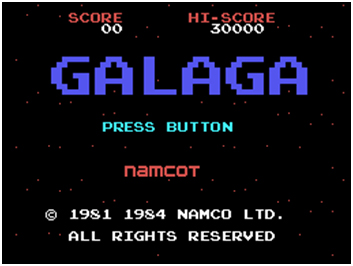 In this month’s edition of Getting Good, we’ll go over the strategies and tips you’ll need to consider in order to beat this game and shatter the high score in your local arcade. However, before we get into the specifics, let’s discuss the new elements this game offers, compared to other space shooters at the time.

Beside the new enemy movements and formations, Galaga introduces new mechanics to the space shooter genre such as boss enemies and the ability to control 2 simultaneous spaceships for increased firepower. Boss Aliens have several particularities; specifically, these enemies require 2 shots to be destroyed. Additionally, when boss galagas are halfway into formation, they will swoop close to the player’s ship and emit a tractor beam. If the player has more than 1 life left, they can allow themselves to get captured so that, once the boss is destroyed, the captured ship joins the player’s formation, doubling his firepower. 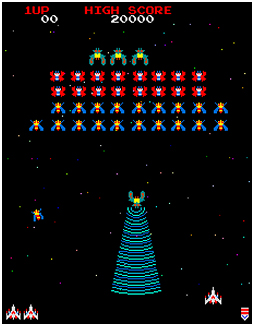 Every 3 stages, the player can participate in trials called “challenging stages”, where he must shoot 40 aliens which fly around at fast speeds to evade fire. If the player manages to shoot them all, he’ll receive a 10,000 point bonus. Otherwise, each bonus alien is worth 100 points.

After the fourth stage, common enemies have a chance to split into three identical aliens, increasing both the challenge of the game, as well as the player’s score should they manage to take every enemy out.

Besides these features, Galaga plays virtually the same as Space Invaders; the player must shoot enemy ships while avoiding their fire. Granted, this is easier said than done, as the amount and speed of enemies can be quite staggering, especially in later levels. However, like with most arcade games, there are several tips and tricks you can use in order to maximize both your odds of survival as well as your score.

The next time you find yourself in front of the screen of a Galaga machine, feel free to try out the following strategies:

Shoot Enemies at the Appropriate Times

Just like with Space Invaders, Galaga has a variety of enemies, all of which grant varying amounts of points to the player upon their demise. The blue aliens are worth 50 points when destroyed in formation, while the red aliens offer 80 points. However, should you shoot the enemies down mid-flight (before they are able to form up), the player will be granted 100 points for the blues, and 160 for the reds. 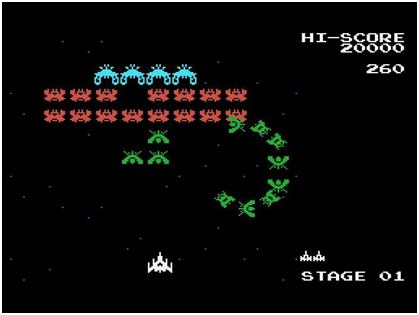 Knowing the scores and improving your aim so you can get rid of enemies before they are able to form is paramount to achieving high scores, so get out there and practice!

Go For The Special Scores

Besides each individual enemy’s worth, there are certain circumstances which may grant additional point if you manage to fulfill the requirements. In later stages, some common enemies will split into 3 special aliens. This change is indicated by a sound, as well as change in color for the affected aliens. Shooting these special enemies will grant players a bonus of 1,000 to 3,000 points, depending on the level.

As we mentioned above, every 3 levels there is a challenge stage where 40 aliens swoop across the screen. If the player manages to shoot down every single one, he will receive a huge bonus of 10,000 points. Otherwise, enemies come in swarms which are worth 1,000 to 1,500 points each, depending on the stage. Additionally, each individual enemy is worth 100 points.

It goes without saying that these challenge stages are a great way to score some extra points, so practicing aim and timing will definitely pay off for the player.

It’s not enough to score points if you can’t stay alive long enough to actually reach challenge stages. In this sense, practicing your movements and evasive maneuvers is just as important as being able to shoot with precision. Luckily, each stage consists of several phases, each of which has an optimal strategy to stay alive while optimizing your score:

Keep in mind that, in the attack phases, enemies will regularly fire at the player with increasing precision in later levels. In the first stages, the enemy fire will concentrate mostly in the middle, whereas in later stages, they will slowly inch closer towards the player. In order to stay alive, it is suggested that the player shoots down one side of the enemy formation to create a safe space in which to take refuge from enemy fire. Furthermore, it is recommended that, as enemies are flying into formation, the player should stay on one side to avoid their fire, and come out once they are formed. This will allow you to maximize your odds of survival and keep you alive long enough to break the high score.

Galaga is one of those games where you only get better once you get accustomed to its unique rhythm, and this, in turn, can only be achieved with practice. That being said, the tips mentioned above can help you stay alive, regardless of your skill level, so take them to heart and keep polishing your skills.

In case you are in the market for a new version of Galaga, we’ve got you covered. Check out:

Here at PrimeTime Amusements, we are on top of providing the very best arcade game sales and rental solutions on the market. Are you looking for an amusement in particular for your gaming room? then let us help you. If you want to place an inquiry with our team of agents, feel free to call us at 1.800.550.0090, or to visit us at 5300 Powerline Rd. Suite 210, Ft. Lauderdale, Florida, 33309.

Saving Retro Gaming One Platform at a Time