Andamiro’s NFLPA Super Star Football game has been a popular title found in arcades since the beginning of 2018, and now operators can refresh it with new coins! 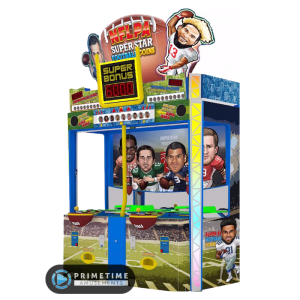 Originally launched with 60 player coins, these 13 new coins are being made available just in time for the kickoff of the 2018-2019 season, featuring the likenesses of  Jimmy Garoppolo, Kareem Hunt, Alvin Kamara, Deshaun Watson, Adam Thielen, Robby Anderson, Melvin Gordon, Christian McCaffrey, Doug Baldwin and Ryan Tannehill, along with rookies Sam Darnold, Baker Mayfield and Saquon Barkley. Here is a sample of 10 of the new coins:

“As we know from testing in a cross-section of location types throughout the country, NFLPA Super Star Football Coins is earning very well,” said Andamiro sales and marketing president Drew Maniscalco. “It operates either as a ticket-redemption game or merchandiser, in the latter case, coin collecting is the added incentive to the player.”

Call us today about how to get your hands on these new coins and if you don’t have an NFLPA Super Star Football Coins in your arcade, we can help you fix that too!