Science has been constantly flirting throughout the years with the idea of virtual reality and augmented reality as means of enhancing the entertainment derived from several mediums, namely, video games and amusements. As you very well may know, video games have been an integral part of many hobbyists’ lives ever since their inception in the mid-twentieth century. Amusements and rides, on the other hand, have been around for far longer, and have rarely varied through the years on its classic formula which relies, mostly, on analog entertainment, for lack of a better description.

However, with the arrival of new, improved virtual and augmented reality technologies, matters are currently taking a turn for the best.

VR and AR have been slowly surfacing in video games as of late with devices like the Oculus Rift, Playstation VR or the HTC Vive which revolutionize the way we view and interact with our favorite games. Although the catalog of titles available for this medium is still small and full with experimental games designed to simply test out the new technology, it offers a great outlook about the future of video games, and much promise to gamers like you and me, who are constantly on the look for new and interesting ways to immerse ourselves in our favorite pastime.

When it comes to video and arcade, VR has been received in multiple occasions with much apprehension and little success. In fact, one of the first attempts at integrating this form of entertainment into these popular hobbies was in the mid 50’s, with the first-ever multi-sensorial movie theater. The device, dubbed Sensorama, consisted of a large projector booth with a small, hood-like window in which the user placed his face. The booth would then project immersive stereoscopic 3D video in a wide angle, provide body tilting functions, stereo sound, and even had a slot in which aromas and winds could be triggered during the films. The Sensorama was prototyped alongside 5 films and was received with positive response. Unfortunately, despite the obvious acclaim, the product couldn’t receive enough financial backing to continue its development. Despite not being popularized or made available to the public, the mechanical marvel, curiously enough, is still functioning to this day. 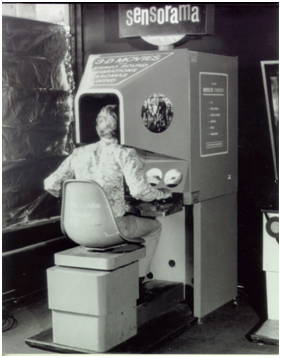 Despite failing to proliferate in cinema, VR is still gaining popularity among consumers in other areas, which is in great part due to the significant advances made by the aforementioned Oculus Rift, HTC Vive and PS VR. Its widespread popularity has helped the technology to make cameos in other entertainment mediums such as in amusements and theme parks. Augmented reality and 3D video has been quite common in theme parks as of late. A good example of these attractions is Universal’s Avengers ride in Islands of Adventure, in which they make use of 3D technology projected on a big screen. The participants are taken on a ride with a roller coaster during which which they can join beloved Marvel heroes in a “battle” against the studio’s most iconic villains. The ride offers amazing 3D images alongside other devices to enhance the user’s immersion such as heat emitters to recreate the sensation of nearby explosions, water splashers for aquatic scenery, and fans to create a sensation of incredible speed as the users careen through the experience. As if that wasn’t enough, the carts can also tilt, bump, and bounce to further increase the user’s immersion as they tumble down the tracks.

This type of amusement has been around for several years already, and though they offer plenty of features to make the experience as realistic as possible, they’re not actually based on VR. However, in 2016, Six Flags made great strides towards designing and building one of the first, fully VR rollercoaster. Using Samsung Gear and Oculus Rift VR devices, the users are treated to a fully immersive audiovisual experience which is synchronized to the blazing fast speed of the rollercoaster. The test was performed using a previously existing ride for which a VR track was developed with great results. Though they’re still relatively young (the first one in Six Flags was opened in 2016), they have been received with excellent remarks, and it is this very engagement which has prompted them to design and build their very own, fully VR roller coaster from the ground up which is scheduled for release for the 2017-2018 season.

It seems VR is the next best thing when it comes to entertainment. By the end of 2016, over 20 parks were equipped with the technology, and users were able to get a feel for the new amusements, which were obviously very well received. As a company, VR Coaster remains wholly committed to designing and equipping amusement parks with the most cutting edge technology designed to improve the user’s satisfaction.

If you operate an amusement facility, we already have tested concepts ready to grab. This includes the VR X-Rider 3D 8-person theater by Simuline and the Omni Arena 2 or 5-player base stations by UNIS.

Frankly, as fans and followers of the VR craze, we can’t be excited enough for these new attractions and we can’t wait for their release so we can experience the thrills of these awesome amusements.

Here at PrimeTime Amusements we always strive to be ahead of the curve when it comes to arcade gaming sales and rentals. If you’re looking for a game in particular, feel free to give us a call at 1.800.550.0090, or visit us at our headquarters located at 5300 Powerline Rd. Suite 210, Ft. Lauderdale, Florida, 33309, where our team of knowledgeable agents will be glad to assist you with any inquiries.

The Truth About Claw Machines