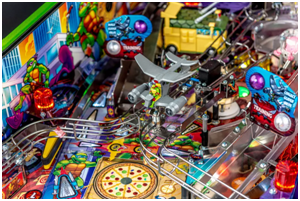 When you hear the word “arcade,” I imagine that rows of electronic video games and amusements instantly come to your mind. A variety of machine types exist in the industry that people can put their money into for fun; One of those classes of games are pinball machines. A timeless concept, pinball had existed in various forms since the 18th century, until the 1930s came along and Gottlieb added flippers. This simple addition changed up the whole dynamic, leading pinball to a golden age of success for decades to come.

While the basic idea of “hit the ball into targets for points and to complete objectives” remains in place for every title, the layout and theme will differ. In the distant past, themes would stick to general subjects or the whim of the game designer, but since the 1990s, almost every machine has used a license to fill in the blanks. Most are adapted from popular movies and TV series like Lord of the Rings or Stranger Things, with the occasional classic rock band thrown in as a nod to pinball’s older demographic. Overall, there is a pinball machine for virtually any theme or topic out there.

Today, we’ve come to show you Stern Pinball’s latest project-in-the-works; a pinball machine styled after our favorite amphibious shinobis, the Teenage Mutant Ninja Turtles. While the series started off in comic books, as is the case for most superhero characters in modern media, it quickly evolved and transitioned into TV, appearing mostly on Nickelodeon. For those who don’t know, TMNT follows the adventures of four mutant, bipedal humanoid turtle teenagers who, under the tutelage of their (also mutated) rat sensei, protect New York City, and eventually the world, against the evil Shredder and his Foot Clan and the Alien Krang, among other baddies.

Aside from their regular appearances as an animated TV show, along with a handful of movies, the TMNT franchise has always been quite popular, even as far as to get two live-action adaptations directed by the renowned Michael Bay. This popularity made it so that it was only a matter of time until their inevitable crossover into pinball territory, and effort that is spearheaded by Stern Pinball, once of the largest designers and manufacturers of pinball machines in the West. 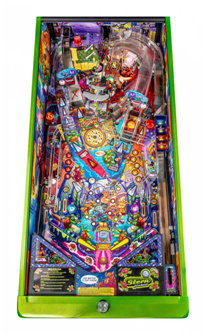 The new Ninja Turtles pinball machine comes in three different versions: Pro, Premium, and Limited Edition (click on the hyperlinks to visit the product pages on our site). All of them feature amazing and colorful hand-drawn art with some of the most iconic features of the show, including multiple renditions of our heroes in a half-shell themselves. In one part, they’re even depicted as their regular pre-mutation turtle selves. Other characters in the art include classic villains like Bebop and Rocksteady, Krang inside his Android body, Slash, Baxter Stockman, and even Shredder himself. Furthermore, all three versions feature a spinning pizza disc that holds up to three balls that are unleashed during the pizza multiball mayhem, 3 flippers, 3 ramps, and a hidden ninja training ball lock area. 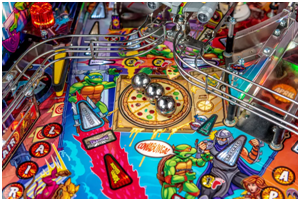 The Premium and Limited Edition models also include several awesome features, including many hand-sculpted figures and other perks that can improve the gameplay somewhat. According to the product description on Stern’s website, these features include the following:

“The Premium and Limited Edition models feature an interactive custom sculpted Turtles Van, equipped to lock up to 4 balls inside with a mechanical opening/closing side door, ready to unleash multiball havoc upon players.  These models also feature the iconic TMNT Glider, a custom-sculpted, player-controlled diverter assembly stationed above both ramps, giving players the ability to control and transport the ball to the flipper of their choice.  In addition, a custom-sculpted mechanical Krang toy hovers over the pop bumpers, jumping up and down while taunting players throughout game action.”

The LE, on the other hand, will be limited to 500 units, and will offer even more awesome perks and premium features, including the following:

The TMNT Pinball machine will release with an MSRP of $6,099 for the Pro Edition; $7,699 for the Premium Edition, and $9,099 for the Limited Edition. However, give us a call and we may have better-than-MSRP pricing to discuss! Pro units will begin shipping in June, with Premium/LE models coming later in the summer. Do note that shipments are limited since Stern’s factory is not operating at full capacity.

EVO 2020 to be Hosted Online - Registrations Are Currently Open