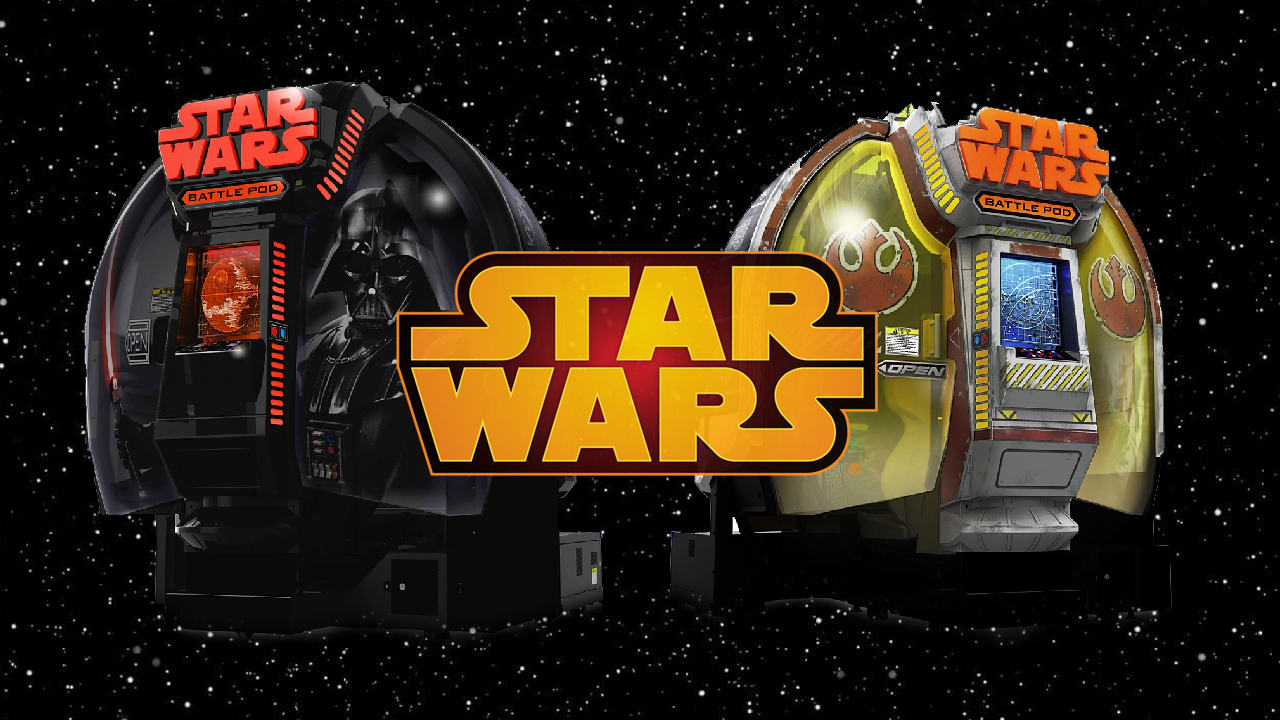 As you might’ve heard about by now, Star Wars: Rogue One just had its worldwide release this past Friday. To the glee of many fans young and old alike, the movie delivered an action packed experience filled with impressive CGI and stellar acting. Most of all, it offered up an engaging story which retraces the events leading from the third prequel film (Revenge of the Sith) to the first of the original trilogy, A New Hope. Without diving too much into spoilers, Rogue One specifically focused on the series of happenings which allowed the Rebels to acquire the plans for the Death Star and reveal its iconic vulnerable exhaust ports.

All cinematic and special effects aside, Star Wars is one of the few film franchises that has managed to breach the generational gap. Other such series include the Marvel and DC cinematic universe, or television shows such as Dr. Who and Star Trek, that have weathered the test of time and still produce quality content for everyone to enjoy. But I digress; this amount of well-deserved fame often translates to Star Wars merchandise, Star Wars clothing and, as evidenced from the title of this article, Star Wars video games.

With a franchise as big as Star Wars, it is only expected that there be a huge amount of video game adaptations. Said games delve even further into the film’s intricacies, going into what is called the Star Wars Expanded Universe. Some games like Star Wars: Shadows of the Empire on the Nintendo 64 focused on events undertaken by side characters which are seldom seen in the movies, but are still considered canon by the movies’ producer, George Lucas. On the other hand, other titles, such as the ones on the arcade, aim to reenact some of the most popular scenes from the movies, and put the player in direct control of the pivotal characters so that the salvation of the galaxy is directly in their hands.

As you can see by now, the premiere of Rogue One has really put us in the mood to discuss Star Wars games. That’s why, in this article, we will list the most important Star Wars video game adaptations for the Arcade.

When the first official Star Wars game was released in 1983, video games had only been in the public spotlight for a little over ten years. This game was produced by Atari and consisted of a space shooter in a first person perspective. This was one of the last games to use color vector display technology, something that gamers only could find in the arcade, apart from getting a Vectrex home console. While the graphics are ancient by today’s benchmarks, being limited to lines and dots, they were sharp and were able to scale in ways that standard ‘raster’ graphics couldn’t achieve.

The game’s story focused on the climactic battle where the first Death Star was destroyed in the 1977 film: A New Hope. The player was thrown into the cockpit of an X-Wing in the role of Luke Skywalker. This was helped by various voiceovers from the films being integrated into the game. 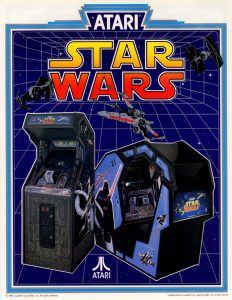 The interesting thing about this game is that the player doesn’t actually need to destroy every single enemy. As long as he survives the onslaught of projectiles and enemies present in each phase, he can easily advance towards the next one. This is particularly important in the final phase, where the player receives a bonus for not firing a single shot, excluding the photon torpedo at the end.

The second installment of the Star Wars arcade games is curiously centered around the final film of the original trilogy. Also created by Atari, this one uses raster graphics instead of vector and is played in an isometric top-down perspective. It was also notable for being the first video game to employ a standard graphics technique known as anti-aliasing, which softens jagged edges of diagonal lines you tend to see with digital effects.

In Return of the Jedi, the player must take control of several vehicles, including the Millennium Falcon, a speeder bike, and even an AT-ST. This game takes several liberties with the story, focusing mostly around the events on the Forest Moon of Endor, and the final destruction of the 2nd Death Star. 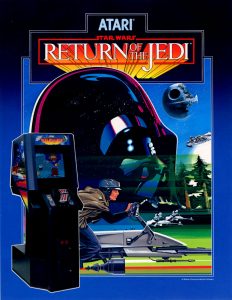 As opposed to our previous entry, vector graphics are back for The Empire Strikes Back. This game was also developed by Atari, not as a standalone product, but rather as a conversion kit for the original 1983 Star Wars arcade game. This translates into very similar gameplay to the first installment, but on the iconic battles of the third movie; namely the Battle of Hoth, and the escape of the Millennium Falcon through an Asteroid field. 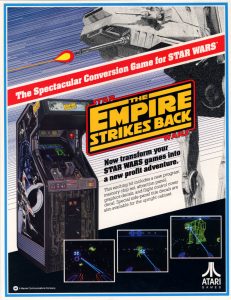 Historically speaking, this game marked the end of the vector monitor for arcades. While it did offer advantages of high contrast effects at resolutions that raster monitors couldn’t achieve, they proved to be a technician’s nightmare. Thanks to those frequent problems, operators just were not really interested in making the vector investment anymore and raster would rule the day.

After a hiatus of a few years, Star Wars game was developed by Sega and released both for the arcade and as a launch title for their Sega 32X add-on console. It brought Star Wars into the realm of true 3D, using the early rendering technique of flat-shaded polygons as Sega showed off their expensive new Model 1 hardware. The game itself focuses on the events of the original Star Wars trilogy, featuring scenes in both the first and third person perspective. Consequently, the developers also took their fair share of liberties with the story, and featured several unrelated battle scenes, stringed together by some iconic elements such as the Death Star, the destruction of a Super Star Destroyer, and battling against several TIE Fighters within an asteroid field. 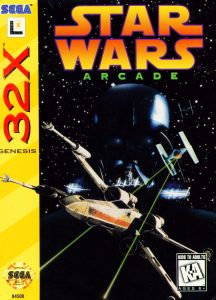 One of the strong points that make this game stand out among the rest is the possibility to play in 2-player cooperative mode, where the first player pilots the spacecrafts, while the other serves as the gunner.

Once again taking a crack at the Star Wars license, Sega created this entry which consisted of a rail shooter that faithfully covers the iconic battle scenes from the original Star Wars trilogy. The main form of gameplay consists of dragging a crosshair around the screen using a joystick, while pressing said joystick’s button to shoot at enemies. In order to start the game, the player must choose from the 3 original films, afterwards he will be presented with several stages depicting important battle scenes from the selected movie.

Upon beating the first 2 films, the player gains access to a bonus boss level consisting of a battle against Boba Fett. And, after beating all the films, the players can go toe-to-toe with the Sith Lord himself, Darth Vader. 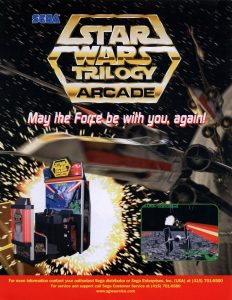 Despite being the sequel to the 1993 game that was regarded as “mediocre at best”, Star Wars Trilogy Arcade was actually very well-received by fans and critics alike. In many aspects, this game is described to be virtually flawless in terms of graphics, sound design, and gameplay mechanics. For this and many other reasons, this one could actually be the best game in this list – depending on your taste.

Not long after Sega gave us their arcade version of the original Trilogy, the Star Wars prequels began to hit theaters with The Phantom Menace. Whether you love or hate that film, the concept of pod racing was iconic enough that people wanted to see how they might fare in racing a pod of their own. This one used Sega’s powerful Hikaru hardware, which debuted with their popular title, Brave Firefighters. 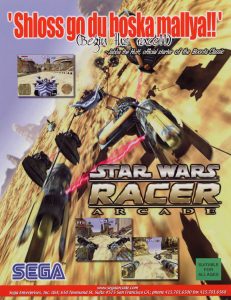 Taking their vast experience on racing titles and combining that with their love of Star Wars to make for a unique racing title that came in two flavors – the standard twin racing cabinet style and the eye-catching Deluxe machine which featured a pod style seat. The controls also attempted to mimic a pod racer, using two throttle controllers instead of a steering wheel.

The racer selection is limited at first but as the game unit racks up plays, more choices become available.

Another title to take a page from The Phantom Menace was Star Wars Starfighter by Tsunami. This was a reworked version of the home console game that was also available on the PC and the PlayStation 2. 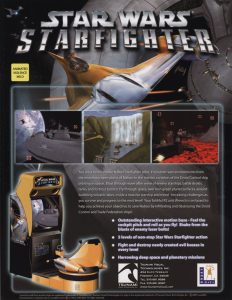 In this game, you play as a rookie Naboo Starfighter pilot as you fight back against the Trade Federation’s invasion of your home planet. There are 5 levels of play with bosses to battle at the end of each level. This one really stood out with the motion base, which allowed the player to feel like they were in a Star Wars simulator instead of just another arcade seat. 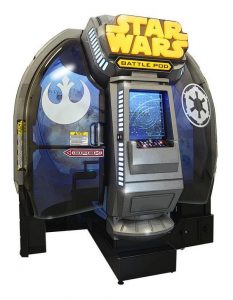 The way that Battle Pod plays is focused on high-octane, constant action. Players will pilot an X-Wing, Snow Speeder, the Speeder Bike, the Millennium Falcon and finally as Darth Vader in his TIE Fighter in a unique mini-story developed just for this game. With this one still available, finding one to play is an easier task if your local arcade likes to keep up with the latest releases.

While the home video game market has many more Star Wars titles to pick from, the ones found in the arcade are designed for a bigger, most exciting experience in every case. If you wish to find out more about this amazing world of entertainment, or are looking for a specific machine, feel free to give us a call at 1.800.550.0090, or visit us at 5300 Powerline Rd, Suite 210. Ft. Lauderdale, Florida, 33309.

Here at PrimeTime Amusements, we’re always glad to be of service!

Building Your Own Arcade Pt. 3: Planning and Executing