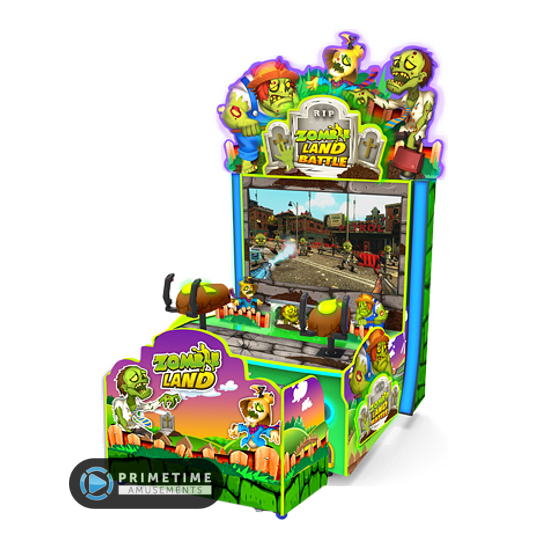 The undead have risen again and only you can stop them in Zombie Land Battle by Coastal Amusements.

Similar to Coastal’s other popular mounted gun shooter Ice Man, players face off against wave after wave of hungry zombies. This time there is no water, meaning no mess or spray that operators have to deal with. The gameplay has also been modified to push the action, while maintaining the bloodless/gore-less nature of the game so that it is appropriate for kids . Players blast the on-screen creatures using their trusty, high powered virtual cannon, moving from region to region, collecting both points and tickets! The gameplay is more dynamic, with the players moving through the levels and blasting, instead of waiting in a fixed position for the hordes to overwhelm you.

Watch Zombie Land Battle in action at Amusement Expo 2019. Video available in 4K UHD; subscribe to us on YouTube to stay up-to-date with the latest product videos!

– Another family/kid-friendly mounted gun shooter that is exclusive to arcades!

– No blood or gore (but there is green zombie slime)

– Easy-to-use mounted guns just require the user to point and shoot. No reloading

– Force feedback built into each gun

– LED lighting set throughout the machine for optimal attraction effects