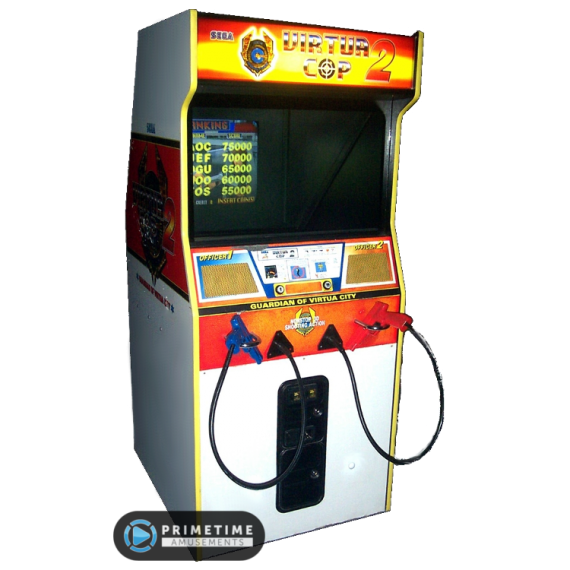 The bad guys are back and this time they are angry in the non-stop rapid fire action game, Virtua Cop 2 by Sega.

This sequel features three missions (The Big Chase; Save The Mayor & Railine Shootout) through which the players must confront the “EVL” crime empire. Your movement follows predetermined path, with branching paths found throughout the game by shooting road signs. It is the player’s job to shoot the criminals that appear before time runs out and they shoot back. Along the way there will be various objects in the background that can be broken if shot, some of which will reveal power ups afterwards. At the end of each level there is a boss battle, as well as one extra final boss battle after all three levels have been finished.

The game uses the same graphics engine as Daytona USA, providing for blazing fast 60 FPS action. This also features the iconic Lock-On Sight system that will zoom in to the most imminent threat. Virtua Cop 2 is a true arcade classic that des[ite its age is still capable of attracting players.

– Iconic sequel to Virtua Cop and another fine entry into Sega’s “Virtua” series.

– Three missions to play with a final boss once those are completed.

– Produced in a standard 26″ upright and 50″ deluxe cabinet

– Sega’s Virtua Cop 2 is no longer produced, having been released in 1995. Please call us about availability. All used models pass through PrimeTime Amusement’s “Certified Pre-Owned” program, which guarantees that the game will be completely refurbished and ready to operate upon arrival.