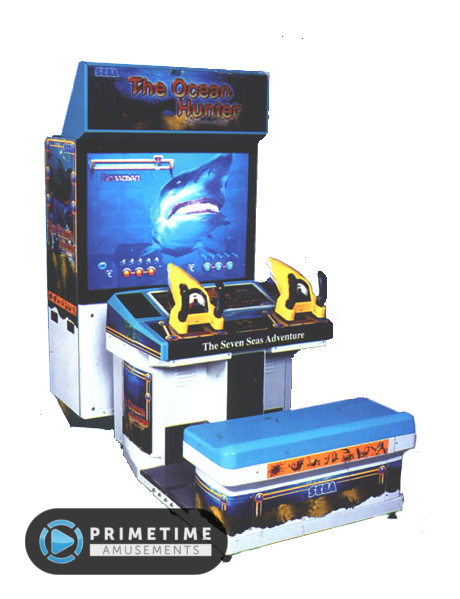 The Ocean Hunter is an excellent 1-2 player underwater shooter where you encounter sharks and other hostile marine life.

Using mounted ‘harpoon’ style guns, players take on the role of underwater adventurers in search of the seven great monsters of the seven seas, hoping to collect the bounties on their heads. This is easy to pick up and play thanks to the gun setup and as they explore the depths of the sea they will come across an incredible array of marine animals. This also happens among spectacular environments such as ancient ruins or coral reefs.

The Ocean Hunter was produced in three cabinets: Standard, Deluxe and Super Deluxe. Please call for pricing and availability.

– Exclusive to arcades – never received a console or mobile release!

– Encounter a wide variety of marine life (some hostile, some friendly) as you venture ahead

– Deluxe version features a 50″ projection screen and bench seating. Ask about upgrading to an LCD!

– Sega’s The Ocean Hunter is no longer produced, having been released in 1998. Please call us about availability. All used models pass through PrimeTime Amusement’s “Certified Pre-Owned” program, which guarantees that the game will be completely refurbished and ready to operate upon arrival.

Check out The Ocean Hunter in action: