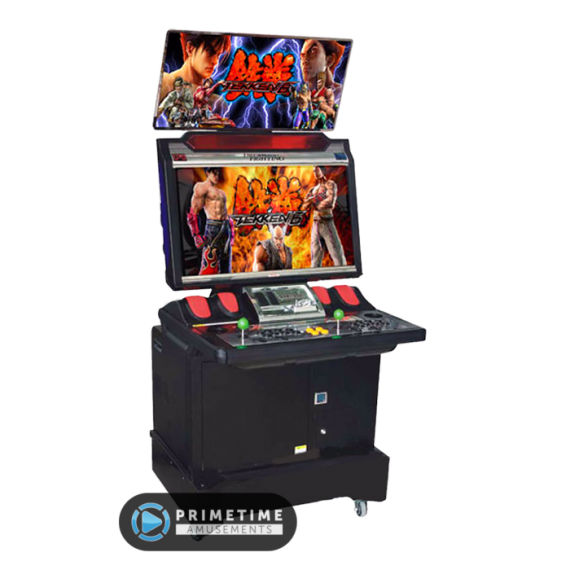 Experience the 6th King Of The Iron Fist Tournament in this well-received sequel of the Tekken series, Tekken 6 by Bandai Namco Amusements.

The game plays similar to Tekken 5 and Tekken 5: Dark Resurrection, so any player familiar with that part of the series should feel right at home. As with each arcade sequel, new fighters join the fray while tweaks & improvements are made to existing fighters. Some of new characters include Leo, Zafina & Miguel while new game features include: multi-tiered fighting arenas that can change from day to night; breakable floors; “Rage Mode” (the lower your own lifebar, the more damage you inflict on your opponent); Character customization to create a unique fighter and more.

Note that Tekken 6 received a very limited release to arcades in North America, making availability scarce; it also was generally found in sit-down style Japanese cabinets. The dedicated US release used a 32″ HD monitor operating at 720p resolution and allowed for 2-players per cabinet. Two major software packages were released for the title, Tekken 6 and Tekken 6: Bloodline Rebellion. The latter release is what the console versions of the game was based on.

– Almost 40 characters to choose from

– Excellent graphics are displayed on a 32″ HD monitor operating at 720p and 60 FPS.

– Namco’s Tekken 6 and Tekken 6: Bloodline Rebellion are no longer in production, having been released in 2007 & 2008 respectively. Please call us about availability. All used models pass through PrimeTime Amusement’s “Certified Pre-Owned” program, which guarantees that the game will be completely refurbished and ready to operate upon arrival. Also ask about our game rentals!

Check out Tekken 6 in action: