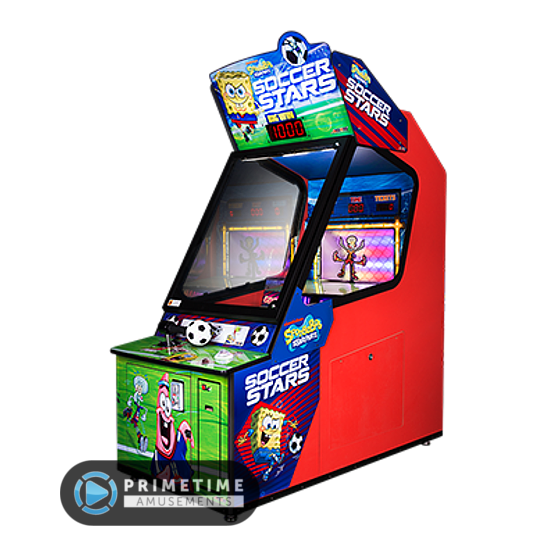 Andamiro has already used the SpongeBob license to great effect, with the character starring in other titles like SpongeBob Order Up and SpongeBob Square Pants Pineapple Arcade. Now he jumps into the world of soccer with SpongeBob Soccer Stars!

This game features a similar design & concept to Andamiro’s Baseball Pro redemption game. The way to play is simple – after crediting up the machine, small soccer balls will be served down a ramp inside of the cabinet. The user takes control of the lever control that has a soccer ball attached to the end. This directly controls the SpongeBob soccer player inside of the game. Time it just right to kick the ball towards the goal where a moving Squidward Tentacles keeps guard. Make as many shots as you can within the time limit (30 seconds is the default but is operator adjustable) and win tickets!

Check out Andamiro’s SpongeBob Soccer Stars in action from the IAAPA 2017 event. Available in 4K UHD!

When the player scores seven goals, a 15-second bonus round is initiated; if a player makes 15 goals, they win the big bonus! A scoreboard displays goals, time and tickets won, while a second display on the playfield keeps track of bonus data.

– Similar in design to the popular Baseball Pro, also by Andamiro

– Tasteful use of RGB LED lighting behind the goal, GOAL! lettering and ball ramp

– Features popular characters from the cartoon show on the cabinet; SpongeBob as the offensive kicker and Squidward Tentacles as the goalie

– Go on a penalty kick bonanza, making as many shots on the goal as you can within the time limit!

– Compatible with coins or card swipe. Please specify what is needed at the time of your order.

– NOTE: (Jan. 2020) – This game has been discontinued. It may be available used through our Certified Pre-Owned Games refurbishment program. Contact us for availability and pricing.