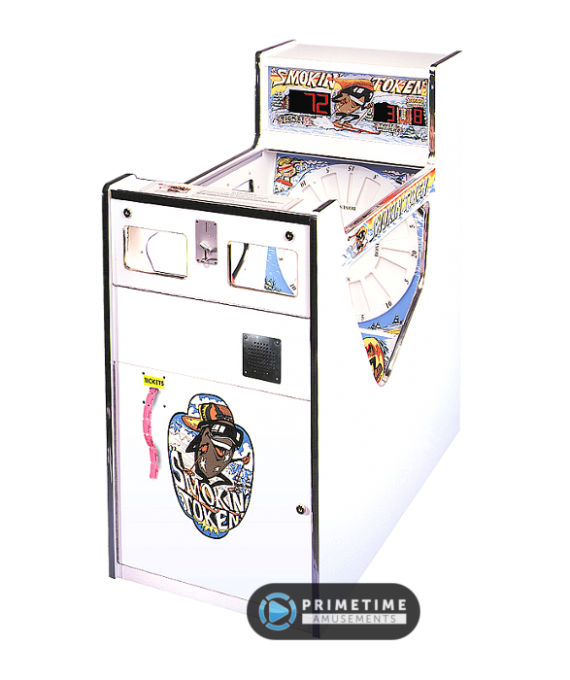 Bay Tek’s Smokin’ Token  series of games is a long time favorite of both players and operators. If you’ve visited an arcade at any time since the 1990s, you’ve probably come across one!

As a quick coin redemption game, the concept is one of simple timing. Players race coins down the ski jump ramp in an effort to hit target slots with a constantly rotating wheel keeping the values on the move. Whatever target goal you make the coin through  This game introduced  a unique ticket multiplier to reward both the novice and skilled players, giving anywhere from 1x to 9x the amount of tickets!

– Manufactured since the beginning of the 1990s, this became a staple of arcades everywhere

– Always rotating wheel with many values to shoot for

– Jumbo cash box is able to handle the busiest of locations

– Small footprint allows it to fit just about anywhere

– Uses a single speaker on the front for digital music & sounds

– Easy access to internal components from the front door

– Easy to operate with tokens or quarters

– Bay Tek’s Smokin’ Token is no longer in production, having originally been released in 1991. Please call us about availability. All used models pass through PrimeTime Amusement’s “Certified Pre-Owned” program, which guarantees that the game will be completely refurbished and ready to operate upon arrival. Also ask about our game rentals!