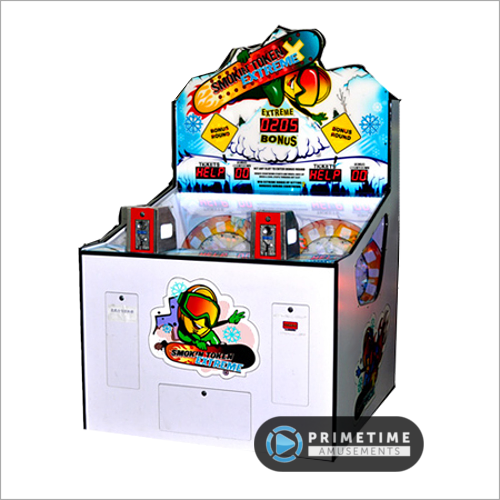 Following up on the incredible success of the Smokin’ Token quick coin game, Bay Tek’s Smokin’ Token Extreme takes this player favorite to a new level!

While still maintaining the addictive quick coin gameplay that made the first game a classic, the Extreme model beefs that up for a new generation. The core concept is still one of simple timing. Players release tokens down a ski slope ramp into a constantly spinning wheel. Successfully hitting a target awards tickets and raises the wheel up to reveal bonus targets worth double tickets! Players win the big Extreme Bonus when they hit a bonus target twice before the wheel descends to its original position. This still maintains the bonus multiplier feature but also features two player stations so that more fun can be had on the same game.

– Always rotating wheel with many values to shoot for

– Features a second wheel that is for additional bonus target values

– Jumbo cash box is able to handle the busiest of locations

– Easy access to internal components from the front door

– Easy to operate with tokens or quarters

– Bay Tek’s Smokin’ Token Extreme is no longer in production, having originally been released in 2008. Please call us about availability. All used models pass through PrimeTime Amusement’s “Certified Pre-Owned” program, which guarantees that the game will be completely refurbished and ready to operate upon arrival. Also ask about our game rentals!