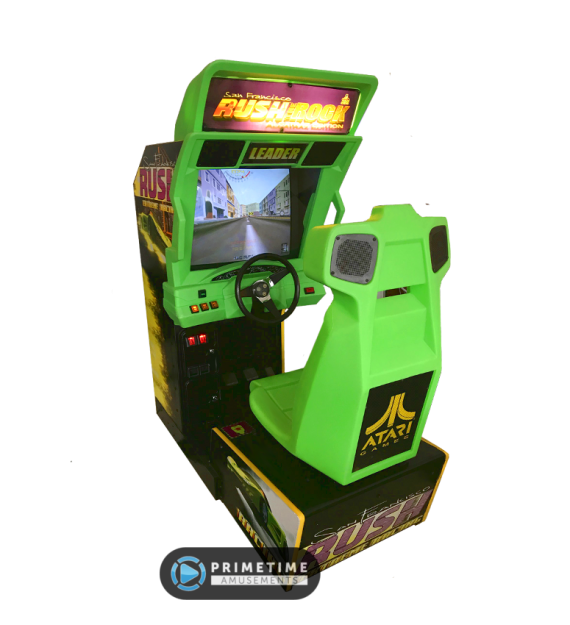 A true classic of the ’90s, San Francisco – Rush The Rock:Alcatraz Edition by Atari Games was one of the most iconic racing titles of it’s day. A major update to San Francisco Rush Extreme Racing, this took what was good and made it even better!

At it’s core, San Francisco Rush allows players to experience the exhilarating thrills of driving through the streets of San Francisco, but without having to worry about the red lights. It was created as an evolution of Atari’s Hard Drivin’ game that was prominent in many arcades of the late ’80s and early ’90s. To create what was billed as “the most realistic racing game ever!” (at the time of release, of course), Atari put a particular focus on developing handling models that appealed to players across the experience spectrum. This, combined with smooth 3D graphics and a familiar location led many to call this their favorite arcade racer.

Note: This game started with “Extreme Racing;” Rush The Rock: Alcatraz Edition is an update to that title that was released a year later in 1997. A true sequel was released in 1999 by the name of San Francisco Rush 2049.

– “Intensely real” driving model, with a focus on realistic physics

– Spectacular jumps, crashes and stunts thanks to fantastic track design

– Twelve cars to pick from (four more than in Extreme Racing)

– Dozens of shortcuts to find and use, increasing replayability

– Graphics shown on a 27″ CRT; ask about an upgrade to modern LCD!

– Link up to eight units for multiplayer fun and tournaments

– San Francisco Rush The Rock is no longer produced, having been released in 1997 by the now defunct Atari Games. It is only available used. Please call for current availability; this is frequently changing. All used units are fully refurbished meaning that they will be ready to operate once it arrives at your location.