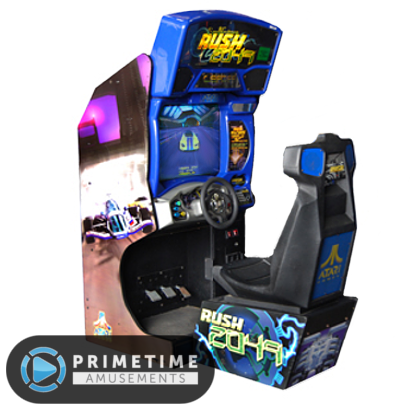 This listing is for the Rush 2029 Twin model; single units may be available and the game can link up to eight units.

The main difference that Rush 2049 offers is indicated in the title. Instead of trying to recreate contemporary tracks and cars, this game jumped fifty years into the future, envisioning the status of both San Francisco and vehicles as they might be at the time. This creates a unique environment for the game while maintaining the mechanics that made the first two Rush games so memorable.

Rush 2049 also made the hardware side of the game distinct by using a high-quality, 5ch, 5-speaker sound system that included a subwoofer under the player’s seat; a shifter attached to the right side of the player seat as opposed to the dashboard and even a clutch pedal for experienced players to enjoy the higher top speed benefits of playing that style. A keypad was integrated into the panel so that players could create local machine accounts and track their progress as they could score top times in each of the three difficulty tiers; the game also incentivized repeat play by hiding 99 coins around the five tracks.

Rush 2049 is the perfect blend of arcade fantasy with technical simulation that made this into an iconic game that players still seek out today.

– Most sought after entry within the San Francisco Rush series

– Five incredibly detailed tracks are closed circuit courses where elements of each track changes on each lap. Sometimes a shortcut on one lap isn’t the best to use on the next!

– Graphics are displayed on the high resolution 27″ monitor; powered by Atari’s Denver hardware platform for high, consistent framerates. Ask about converting to a monitor LCD monitor!

– 4-gear shifter system with a clutch pedal for advanced players

– Link Up To Eight (8) units for multiplayer excitement!

– San Francisco Rush 2049 is no longer produced, having been released by the now defunct Atari Games. It is only available used. Please call for availability. All used units are fully refurbished meaning that they will be ready to operate once it arrives at your location.