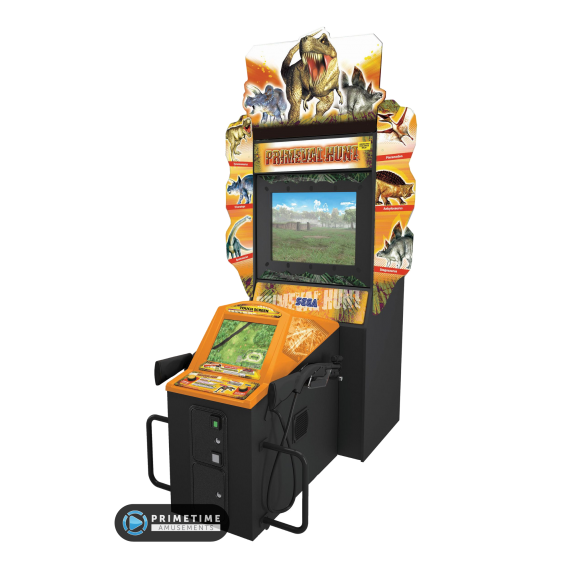 The hunt is on in Primeval Hunt, a very innovative light-gun based dinosaur hunting game.

You are a hunter that travels back in time for a chance at hunting up to ten (10) famous dinosaurs including T-Rex, Triceratops, Pterodactyl and Velociraptors. What really stands out about Primeval Hunt is the ‘Free Roaming’ gameplay feature. This is accomplished using a touchscreen display built into the control panel. The screen displays an overhead map of the region along with where the dinosaurs are located. Use your finger to draw your path to track them down but be careful as the dinosaurs may fight back! This gives the player complete freedom for exploring the ancient world that the dinosaurs inhabit.

Produced in two models, a standard and a deluxe, this listing is for the standard model.

– Exclusive to arcades – no home console or mobile port of the game exists!

– Hunt ten iconic dinosaurs in an exotic landscape of the past. This includes the T-Rex, Triceratops, Velociraptor, Apatosaurus and Stegosaurus!

– Unique ‘free roam’ feature thanks to the touchscreen allows players to explore the ancient world off rails!

– 12 stages to explore plus a hidden bonus stage

– Standard model features a 27″ LCD display and a 22″ touchscreen

– Sega’s Primeval Hunt is no longer produced, having been released in 2008. Please call us about availability. All used models pass through PrimeTime Amusement’s “Certified Pre-Owned” program, which guarantees that the game will be completely refurbished and ready to operate upon arrival.