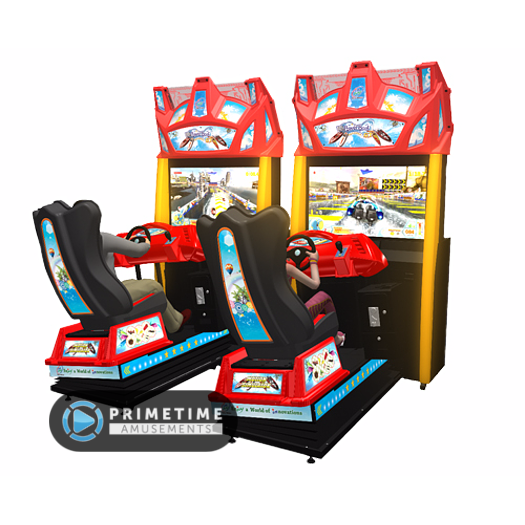 Based on a computer game of the same name, hop on board and take the riverways by storm PowerBoat GT by InJoy Motion.

As the name implies, PowerBoat GT involves boat racing instead of using typical vehicles like cars. Players have ten sweet speed boats to choose from and nine tracks to enjoy. Along each twisting course, power-ups let you gain quick advantages like a turbo boost and weapons. Ramps add to the excitement on the track as you catch air! All PowerBoat GT games are linkable up to 4 machines for enthralling head-to-head competition. Thanks to the motion system, this game is also a simulator! Feel like your catching real waves as you drive!

PowerBoat GT has been produced in several models.

Please call in regards to current pricing and availability for each style; operators can link up to four units on any model. Models can be purchased in packages of 2 or 4, which will also include a specific marquee for the number of games being used.

“DX” models refer to motion Deluxe units that use a traditional electric motors/metal arms to generate the motion effect. This provides 6 degrees of motion on a 2-axis base. Units come with a 32″ 720P HD screen. Here is a single PowerBoat GT DX unit: 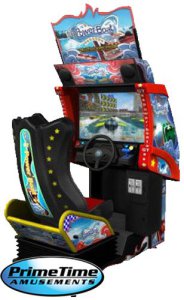 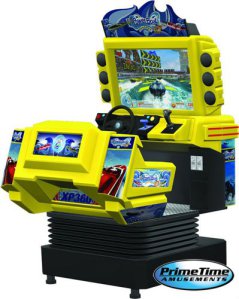 “AIR” refers to the newest design that replaces the expensive electrical motors with an innovative air bladder system. This means that the game is less expensive to produce and easier to maintain while still producing realistic motion effects. The AIR system uses a 3-axis system instead of 2 and is also capable of providing up/down seat motion which mimics bumps. These also use a new cabinet design that features striking translucent RGB LED back lit side fixtures and marquee. Installed Dimensions: Height: 92.5″, Width: 44″, Depth: 79″ Electrical: 110V @ 1320W per car. ROLL: ±13.5° / PITCH: ±6.5° / HEAVE: 10 cm per car. Rider weight limit: 330lbs. per seat.

AIR Units are likely to be easier to obtain than the others but give us a call and we can figure out what you need!

– Based on the PC boat racing game of the same name

– Produced in three models as delineated above

– 10 selectable speed boats to choose from

– 9 selectable tracks to race on

– Graphics displayed on a 42″ HD screen (AIR and SDX models)

– Grab power-ups to turn the tide of the race!