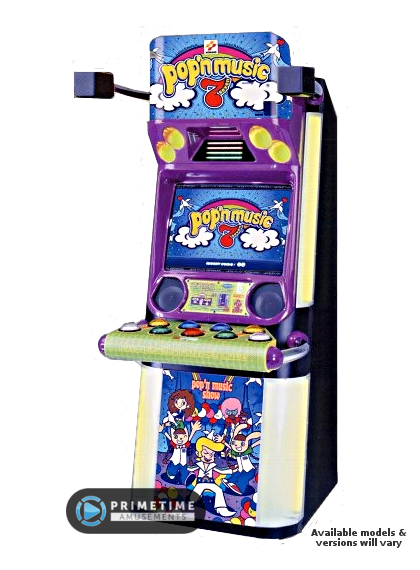 Since 1998, Konami’s Pop’n Music series has graced the arcades more than two dozen times. Most of those releases have stuck to being released in Japan but a few have made their way to the United States.

Despite having so many released editions, Pop ‘N Music is a great, but challenging game for players of all ages. Each console features nine (9) buttons that that need to be pressed in the perfect timing with the falling notes. Each version features numerous & fun songs from a variety of genres including electronica, Eurobeat, Anime, Reggae and more. Songs also range in difficulty from Easy (great for beginners) to extremly difficult. Select your cute cartoon character before the song, which will dance along with you to the beat.

Note that while Konami still launches a new Pop ‘N Music title in Japan somewhat frequently, more recent titles have not been manufactured in the United States. We generally have access to games that did receive an official wide release in North America and do not presently import new games from Japan. Give us a call to see if any older PNM games are presently available!

– Each version sports vibrant colors and a fun cabinet design

– Play using your hands instead of your feet! Nine button control panel layout with durable switches

– Play alone or with a friend

– Select your character and music that fits your tastes

– Select from various difficulty modes and aim for the best score & grade possible in each; mode types will vary between releases.